This article appeared online at TheNewAmerican.com on Thursday, June 23, 2016: 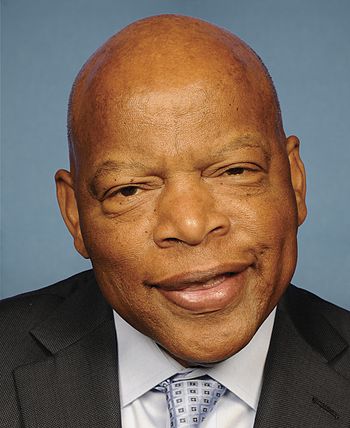 Seeing an opportunity that couldn’t be wasted, Representative John Lewis (D-Ga.) led a Progressive sit-in that brought to a halt the proceedings of the House of Representatives this week.

Lewis, a longtime radical revolutionary with Communist Party affiliations, led the sit-in, blaming it on Republicans’ unwillingness to bring to the floor a vote on expanding background checks and adding suspected terrorists to a “no fly/no-buy” watchlist. The sit-in began at 10:30 a.m. Wednesday and, at its peak, numbered nearly 170 House Democrats (along with several Democrat senators) before it petered out around 3 a.m. today (Thursday).

Some called it grandstanding while others called it an “improper way” to bring legislation to the floor. Most members called it a violation of House rules but House Speaker Paul Ryan, rather than demanding that the gaggle of leftists be forcibly removed (it would “look bad on TV,” according to one House member), he decided to end the session and restart it on July 5.

To view the sit-in as merely grandstanding to get favorable media attention is to miss the point. The sit-in had two objectives: using tne June 12 terror attack in Orlando by a radical Islamist as a rationale for removing firearms from law-abiding citizens.

The leftist background of Lewis extends back to the early 1960s. In 1963, he became chairman of the radical Student Nonviolent Coordinating Committee (SNCC), which was founded by Ella Baker, an avowed socialist with ties to the Communist Party USA. During that time he wrote an article about another infamous communist, Paul Robeson, which was published in the CPUSA’s propaganda magazine Freedomways.

Lewis’s long history of using disruptive tactics to accomplish his ends includes a sit-in on October 13, 2013 when he, along with seven other members of Congress, were arrested while sitting in the middle of Independence Avenue in Washington during rush hour. They were then trying to “influence” Congress to pass legislation over illegal immigration. Lewis has been a long-time member of both the Congressional Progressive Caucus and the Congressional Black Caucus.

Aiding him in his efforts to disrupt House proceedings on Wednesday and Thursday was another hard-core radical, Alcee Hasting (D-Fla.), who has a history of corruption, malfeasance, and treason that goes back to the early 1980s. For instance, in 2012 the progressive group Citizens for Responsibility and Ethics in Washington placed Hastings at the top of their list of politicians who paid the most in salaries and fees to relatives, friends, and mistresses.

The Washington Times reported a link and a possible coordination of efforts between Hastings and Hillary Clinton who visited Washington just before the protests began. Wrote the Times: “Wednesday’s protest followed a Capitol visit from presumptive Democratic presidential nominee Hillary Clinton, whose staff was made aware of the impending protest, according to Mr. Hastings.”

That the protests had little to do with reducing violence through legislation on guns was made clear by Ramzi Kassem, a law professor at the City University of New York:

It’s ridiculous, the notion that somehow the watchlists are a reliable measuring stick for who should be deprived of an ability [and right] to purchase weapons.

The discussion on gun control vastly overstates the reliability of the watchlists. They lack transparency and any available process to get off the lists of people who believe they’ve been wrongly listed.

We know that there are no meaningful or even at this point knowable ways for determining who’s on a watchlist or should be, and connecting that to gun purchases is only doubling down on a problematic situation to begin with.

No, the real reason for the sit-in on Wednesday and Thursday had nothing to do with actually stopping terrorist acts such as the one that occurred recently in Orlando, but everything to do with advancing the gun (read: people) control agenda. As William F. Jasper, writing in The New American in 2013, expressed it: “A cardinal feature of communist regimes, like all dictatorships, is the prohibition of private ownership of arms, creating a monopoly of force in the hands of the state.”

It was another one of those opportunities by radicals and communists that just couldn’t be missed.

communist Constitution Corruption Democrat dictatorship firearms Freedom Gun Control Harry Reid Hillary Clinton House of Representatives media progressive propaganda Republican revolutionary terrorists War
This entry was posted on Friday, June 24th, 2016 at 4:23 am and is filed under Crime, Politics. You can follow any responses to this entry through the RSS 2.0 feed. Both comments and pings are currently closed.
Many of the articles on Light from the Right first appeared on either The New American or the McAlvany Intelligence Advisor.