This article appeared online at TheNewAmerican.com on Wednesday, June 22, 2016: 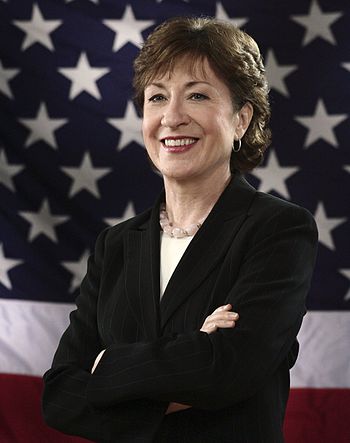 The day after four anti-gun bills were defeated along party lines, Maine Republican Senator Susan Collins rolled out her “Feinstein-lite” bill, claiming that it was a “bipartisan” measure sure to appeal to enough senators to pass.

Her bill would still infringe on precious rights in the Second, Fourth, and Fifth Amendments, just as the previous four bills would have, but she pressed on regardless, saying, “If you are too dangerous to fly on an airplane, you’re too dangerous to buy a gun. Surely the terrorist attacks in San Bernardino and Orlando that took so many lives are a call for compromise.”

Her bill, if passed into law, would negatively impact far fewer Americans than Senator Dianne Feinstein’s bill would have, the latter of which would have handed over to the attorney general the power to determine whose names were put on a proposed “No fly/No buy” list. Collins’ bill would take those on the current no fly list and add to it those Homeland Security has on its airport check-in list. That would stop about 2,700 Americans and 106,300 foreign nationals from buying guns — far fewer than the potentially hundreds of thousands the attorney general might add.

But it would still void the probable cause and due process guarantees in the Bill of Rights.

In an ironic twist, resistance to Collins’ bill came from Senator John Cornyn (R-Texas), who saw his own bill go down in flames on Monday for the same reason. Said Cornyn:

It’s a slippery slope when an American citizen is denied a constitutional right, without forcing the government to come forward with some evidence on the front end [that a person should be prohibited from buying guns].

The coup de grâce on Collins’ bill was performed by the NRA’s Executive Director Chris Cox on Tuesday:

No one wants terrorists to have legal or illegal access to firearms. Keeping guns from terrorists while protecting the due process rights of law-abiding citizens are not mutually exclusive.

Unfortunately, Senator Collins and others are focusing their efforts on unconstitutional proposals that would not have prevented the Orlando terrorist attack.

Other proposals are being offered by observers just as concerned as Cox, including expanding the number of agents working for the FBI, beefing up further intelligence services, and insuring that all data about potential threats is available to local, state, and federal law-enforcement agencies. Other plans involve “community relations” efforts to ward off those considering joining ISIS and other terrorist groups, while still others push “neighborhood watch” groups as a front-line defense against attacks. Additional funding for better and more advanced training for first responders is being proposed as well.

No proposals, however, involve common-sense measures such as repealing “gun free” zones or expediting concealed carry permit reciprocity among and between the states.

Although often well-intended, not one of the aforementioned proposals takes advantage of evidence that is right before senators’ eyes: Enhanced gun ownership by private citizens reduces violent crime. Since the start of 2015 there have been 22 instances of Islamist terrorist attacks in the United States, and nearly all of them have taken place in “gun-free” zones, otherwise known colloquially as “killing zones.” And it is reasonable to expect that those attacks will continue if not increase in frequency.

The evidence that most in Congress seem willing to ignore comes from the FBI. The homicide rate for the United States in 2014 (the most recent year available) was just 4.5 per 100,000 population, a decrease of 50 percent since 1991. During the same period, private ownership of new firearms in the United States has skyrocketed from six million to over 16 million. This correlation provides strong support for the contention that more guns equal fewer crimes. The proliferation of privately owned firearms has resulted in a markedly less violent society rather than a more violent one.

This raises a crucial question: Why would Congress concentrate on abolishing the conditions that have led to much less violence? If they were really interested in reducing violence, why would they ignore the conditions that have reduced such violence by half over the last 25 years? If their motive isn’t to decrease homicides, then what is their actual intent in pushing for ever more restrictions on gun ownership?

In any event, in the endless and senseless war against guns, Collins’ bill, if allowed to come to the Senate floor as promised by Majority Leader Mitch McConnell, will likely suffer the same result as the four that died on Monday.

attack Bill of Rights Constitution Crime Fifth Amendment firearms guns Mitch McConnell NRA rights terrorist threat unconstitutional violence
This entry was posted on Thursday, June 23rd, 2016 at 5:08 am and is filed under Constitution, Crime, Politics. You can follow any responses to this entry through the RSS 2.0 feed. Both comments and pings are currently closed.
Many of the articles on Light from the Right first appeared on either The New American or the McAlvany Intelligence Advisor.