This article was published by The McAlvany Intelligence Advisor on Friday, June 17, 2016: 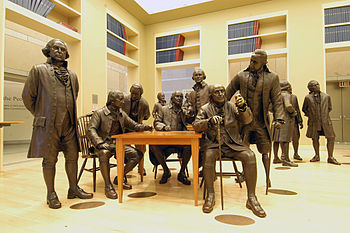 Missing from Donald Trump’s many public pronouncements and offerings is any clear understanding of the limitations, restrictions and “chains” of restraint placed on the federal government by the republic’s founders. In his business life he is certainly acquainted with at least one part of the Fifth Amendment: “no person’s private property [shall] be taken for public use, without just compensation.” He used that to wrest a private home from its owner simply because it was in the way of the parking lot of one of his casinos.

As for the other part, equally obscure but increasingly threatened by a government no longer bound by those chains, Trump may be ignorant: “No person shall … be deprived of life, liberty, or property without due process of law….”

Watch lists like the No-Fly List and the Terror Watch List (known by its descriptor as the Terror Screening Database, or TSDB), have survived attacks by constitutionalists claiming that they are an invasion of rights guaranteed by the Fifth Amendment.

Hanging around his neck like a millstone is the conversation Trump had with George Stephanopoulos on ABC’s This Week on November 22, 2015 about those watch lists:

DONALD TRUMP: We have to have a watch list…

Following numerous interruptions by Stephanopoulos trying to steer the conversation, Trump was able to explain his position:

Exasperated, Stephanopoulos finally got to the question he wanted Trump to answer. Trump’s answer has followed him around ever since:

STEPHANOPOULOS: Mr. Trump, yes or no, should someone on the terror watch list be allowed to buy a gun?

This is just the sort of comment that makes constitutionalists cringe, and begin to ask: if Trump wins in November will we be getting just another version of “constitutionalist scholar” Barack Obama?

Those constitutionalists may shortly have their answer. On Wednesday Donald Trump tweeted that he would soon be meeting with top officials at the National Rifle Association (NRA) “about not allowing people on the terrorist watch list, or the no-fly list, to buy guns.” The NRA cordially responded, but with a warning:

We are happy to meet with Donald Trump [but] the NRA’s position has not changed … due process protections should be put in place that allow law-abiding Americans who are wrongly put on a[ny] watch list to be removed.

Together those two watch lists are monitoring the activities of more than two million people, at least 100,000 of them American citizens. Emerging from that meeting Trump may be the victor, having persuaded the NRA, which has already endorsed Trump, that its concerns about due process are nothing to worry about, that as president he’ll make sure that those usurped government powers won’t be abused.

On the other hand, the NRA might emerge the victor, having given Trump a crash course on the Constitution and the reasons for those restraints placed on the federal government by the Founders. He might hold a press conference and tell the folks that he now understands why they are so upset, that the establishment has been ignoring those restraints for years, which have resulted in the growth of government far beyond the Founders’ intentions. He might even state that his change of heart, and his new understanding, is causing him to oppose all watch lists, including the No-Fly, No-Buy legislation proposed by anti-gunner California Democrat Senator Dianne Feinstein.

It’s titled Denying Firearms and Explosives to Dangerous Terrorists Act of 2015. According to that bill, offered to “increase public safety by permitting the Attorney General to deny the transfer of firearms or … licenses to known or suspected dangerous terrorists,” it gives unconstitutional authority to the Attorney General.

And just how, exactly, would the Attorney General decide who would go onto the new so-called No-Fly, No-Buy list? Would he or she refer to the Constitution, or the Fifth Amendment, or the Due Process Clause in order to protect innocents from having their names inadvertently (or deliberately) placed on it?

The Attorney General may deny the transfer of a firearm … if [he or she] (1) determines that the transferee is known (or appropriately suspected) to be or have been engaged in conduct constituting, in preparation for, in aid of, or related to terrorism, or providing material support or resources for terrorism, and (2) has a reasonable belief that the prospective transferee may use a firearm in connection with terrorism.

Complete discretion would be left up to the tender mercies of the Attorney General. Gone would be Constitutional guarantees. In their place would be only the AG’s “reasonable belief” that he or she thinks that someone somehow might have some connection with terrorism, whatever that undefined term means.

Due Process would continue to be denied. In Vitek v. Jones, decided in 1980 by the Supreme Court, those due process rights were spelled out in detail. They include

A written statement by the [decision maker in making his ruling]…

Effective and timely notice of all the foregoing rights [to the defendant].

Trump might emerge from that meeting with the NRA as a freshly minted Constitutionalist, now jealous and protective of its precious acknowledgement and guarantees of God-given rights and maybe even deciding that watch lists in general, and Feinstein’s in particular, are an egregious assault on those rights.

Background on Eminent Domain in the US

TheTruthAboutGuns.com: Donald Trump: No Guns for Americans on the Terrorist Watch List

Reason: No-Fly List, No Guns: Trump Agrees with Obama, Clinton. He Thinks the NRA Should, Too.

The Fifth Amendment to the United States Constitution

The Due Process clause of the Fifth Amendment

assault weapons Constitution danger Donald Trump Eminent Domain Establishment Fifth Amendment firearms Freedom guns law Liberty NRA politics Private Property rights truth understanding
This entry was posted on Saturday, June 18th, 2016 at 5:39 am and is filed under Constitution, Politics. You can follow any responses to this entry through the RSS 2.0 feed. Both comments and pings are currently closed.
Many of the articles on Light from the Right first appeared on either The New American or the McAlvany Intelligence Advisor.