This article was published by TheNewAmerican.com on Friday, June 3, 2016: 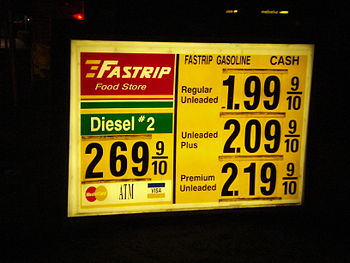 On November 17, gas prices had dropped to $1.99 in Bakersfield, California, due to falling Oil prices

Following the OPEC meeting on Thursday, Saudi Arabia’s new oil minister, Khalid Al Falin, told CNN that $60 a barrel oil is “very possible” by the end of the year, with even higher prices expected next year. He said that supply and demand in the oil market have “converged” without the OPEC cartel needing to curtail supply. In short, OPEC is celebrating its strategy of letting the lowest oil prices seen in years weed out the weak and marginal players in the United States, resulting in cuts in production. As Qatar’s oil minister exulted at a press conference in Vienna following the meeting, “The worst is over for oil.”

Translation: Nothing but higher oil (and gasoline) prices from here on out.

Oil prices on the global market closed Thursday just over $50 a barrel, seeming to confirm exactly that. The U.S. Energy Information Administration (EIA) said that production continues to fall in the United States while “demand numbers are strong,” according to Donald Morton, head of the energy trading desk at Herbert J. Sims & Company.

The only trouble is that a closer look at those numbers from EIA reveals that U.S. crude oil production is down a scant six percent since hitting a peak of 9.6 million barrels per day (bpd) in April 2015. U.S. producers are still pumping at rates not seen in decades, well above nine million bpd. According to the EIA, the vast surplus overhanging the market continues to pressure oil prices, with almost 33 days of supply of crude and 25 days of gas — 80-year highs — still sitting in storage tanks and rail cars.

Another factor is the low break-even points that fracking wells have enjoyed, so prices below $40 a barrel are still profitable. So profitable, in fact, that frackers are beginning to bring their idle rigs back into production. This is reflected in the EIA numbers showing U.S. output dropping by 83,000 bpd in December, decreasing to 58,000 bpd in February, and just a minuscule 6,000 bpd in March. Whiting Petroleum, the largest oil producer in the Bakken Formation (an almost incomprehensibly large oil field of 200,000 square miles beneath Montana, North Dakota, Saskatchewan, and Manitoba, containing more than seven billion barrels of oil) announced it is completing 100 of its wells that it idled during the oil price downturn.

And then there’s the Gulf of Mexico, unheralded and rarely mentioned, which is becoming an increasingly important factor in the supply-demand equation. The EIA estimates that oil production from off-shore rigs is expected to jump eight percent this year and 10 percent next year, bringing new production to nearly two million bpd by the end of 2017. Plus there are at least six new deep-water wells scheduled for launch this year and early next.

In retrospect, it should be clear, then, that the recent oil spike was driven more by hope than by reality. The production declines caused by fires in Canada and political disruptions in Nigeria and elsewhere are proving to be temporary, while Iran continues its quest to bring another million bpd online this year.

OPEC’s chortling that the “worst is over” is likely to prove premature. History may instead record that $50 oil is the peak for the rest of the decade.

Cartel Energy Fracking North Dakota oil Oil Prices OPEC reality Surplus
This entry was posted on Saturday, June 4th, 2016 at 5:00 am and is filed under Energy, Free Market. You can follow any responses to this entry through the RSS 2.0 feed. Both comments and pings are currently closed.
Many of the articles on Light from the Right first appeared on either The New American or the McAlvany Intelligence Advisor.