Endorsements of Trump by Billionaires May Open Other GOP Wallets

This article appeared online at TheNewAmerican.com on Monday, May 16, 2016: 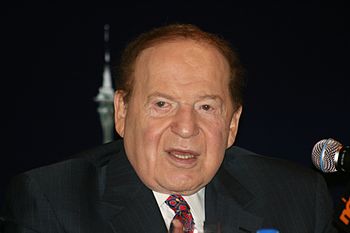 Last week T. Boone Pickens, chairman of hedge fund BP Capital Management and with a personal net worth estimated at about a billion dollars, endorsed Donald Trump and offered to host some fundraisers for him.

The big news came on Friday when Sheldon Adelson (shown), chairman and CEO of the Las Vegas Sands Corporation and with a personal net worth estimated at more than $25 billion, published his endorsement of Donald Trump in the Washington Post. That was followed up by revelations from insiders to the New York Times that he will put his money where his mouth is, to the tune of $100 million. That’s an amount equal to the total Adelson contributed to 34 Republican campaigns in 2012, only this year he will be focusing his largesse almost exclusively on getting Trump elected in November.

Adelson explained his reasoning and urged other Republicans to get on board as well:

While the primary cycle still has some important elections ahead, it is clear that Donald Trump will be the Republican nominee for president.

I am endorsing Trump’s bid for president and strongly encourage my fellow Republicans — especially our Republican elected officials, party loyalists and operatives, and those who provide important financial backing — to do the same.

The alternative to Trump being sworn in as the nation’s 45th president is frightening.

If Republicans do not come together in support of Trump, Obama will essentially be granted something the Constitution does not allow: a third term in the name of Hillary Clinton.

Adelson’s $100 million, according to two Republicans privy to his intentions, will be spread among several different political action committees under the rules. Back in 2012, when he was asked about the uber-wealthy giving massive sums to support candidates, Adelson told Forbes staffer Steven Bertoni, “I’m against very wealthy people attempting to or influencing elections. But as long as it’s doable, I’m going to do it. Because I know that guys like Soros have been doing it for years, if not decades.”

Trump earlier criticized suggestions that Adelson was going to fund Marco Rubio’s campaign, tweeting back in October that “Sheldon Adelson is looking to give big dollars to Rubio because he feels he can mold him into his perfect little puppet. I agree!” Trump stepped away from that comment on Friday, saying, “I know that people maybe like me and they form a super PAC, but I have nothing to do with it. So we’ll see what happens.”

Adelson’s ideology was strongly Democrat for years, but he switched parties in November 2012, claiming “I Didn’t Leave the Democrats. They Left me” in a letter outlining their betrayal of causes near and dear to Adelson, including support of Israel, which is waning among Democrats. Writing in The Wall Street Journal, Adelson said:

One obvious example is the party’s new attitude toward Israel. A sobering Gallup poll from last March asked: “Are your sympathies more with the Israelis or more with the Palestinians?” Barely 53 percent of Democrats chose Israel, the sole liberal democracy in the region. By contrast, an overwhelming 78% of Republicans sympathized with Israel.

In a face-to-face conversation between Trump and Adelson last week, any lingering concerns about Trump’s support, or lack of, for Israel vanished in the face of Adelson’s endorsement.

Trump and Adelson also appear to agree on the need to reverse the country’s forcible move by Democrats toward socialism. Wrote Adelson in 2012: “What scares me is the continuation of the socialist-style economy we’ve been experiencing for almost four years. That scares me because the redistribution of wealth is the path to more socialism, and to more of the government controlling people’s lives.”

Adelson’s endorsement may open more doors, and wallets, as wealthy Jewish activists may be inclined to overcome doubts they might have about Trump and his support of Israel.

One especially large wallet remains, for the moment at least, closed to Trump: that belonging to the Koch brothers. Early on in the primaries, a spokesman for them said they had decided to stay out of the primaries in light of the fact that attacks by others trying to keep him from winning the nomination simply weren’t sticking to Teflon Don. Whether they will direct some of their estimated $300 million in political funds toward Trump in the general election remains to be seen. They may still be smarting from backing Republican losers with some $200 million of their money in 2012.

Democrat Donald Trump elections Hillary Clinton ideology Koch Brothers Obama Republican Socialism
This entry was posted on Tuesday, May 17th, 2016 at 7:15 am and is filed under Politics. You can follow any responses to this entry through the RSS 2.0 feed. Both comments and pings are currently closed.
Many of the articles on Light from the Right first appeared on either The New American or the McAlvany Intelligence Advisor.