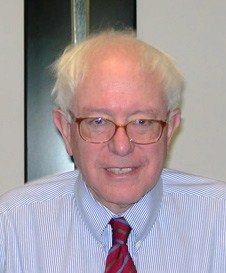 Ted Cruz. I don’t know if he likes me, but he is one hell of a competitor. He is one smart guy. He has got an amazing future….

I understand how Ted feels, and Heidi, and their whole beautiful family.

The political winds have shifted perceptibly, with Trump’s romp in Indiana exposing the false assumptions made less than a year ago: Trump was a curiosity only, not to be taken seriously, while Clinton was preparing for a coronation in July at the Democratic National Convention. But with Bernie Sanders handing Clinton a smashing and stunning defeat on Tuesday (Clinton led in nearly every poll taken prior to the primary) and his verbalized determination to stay in the race to the bitter end, there is now a role reversal amounting to what some are calling a sea change in American politics.

In past elections Democrats rallied around their favorite candidate, while Republicans made every attempt to demolish and obliterate each other. Once the Republican survivor was known, damaged and weakened from the fight, the Democrat nominee descended, like a Siamese fighting fish, to finish off that survivor in the national election. This year it is Trump waiting while Sanders, with his incessant and effective attacks on Clinton, damages her and calls into question the “coronation” assumption made at the beginning of the contest.

Republican National Chairman Reince Priebus tweeted just minutes after polls closed Tuesday night: “Donald Trump will be presumptive GOP nominee, we all need to unite and focus on defeating Hillary Clinton.” This from the head of the party whose supporters moved heaven and earth to neuter and emasculate Trump as he continued, despite its attacks, to roll over his opponents.

When far-left global editorial director for the Huffington Post, Howard Fineman, conceded that Trump has more than a shot at winning in November, one finally became aware of just how massive that sea change is. Fineman listed several good reasons why Trump could sweep the November elections, summarized here:

Fineman admits that there are at least five large blue (heavily Democratic) states where Trump “could compete, especially for the votes of … former Reagan Democrats: Florida, Ohio, Virginia, Wisconsin and, yes, Indiana.”

Trump could conceivably get a little help from the Department of Justice and the FBI as it finishes up its investigation into Hillary Clinton’s use of unsecured e-mail servers, allowing vital state secrets to be easily lifted by foreign enemies. Former Judge Andrew Napolitano has been watching that investigation and recently wrote that the final straw might just be the testimony of one Bryan Pagliano (obtained by granting him immunity from prosecution). The former IT director for Clinton’s 2008 presidential campaign, Pagliano was hired to maintain her private e-mail server while she served as Obama’s secretary of state. He deliberately and intentionally opened the State Department’s e-mail streams, both public and secret, to Clinton’s server in her home in Chappaqua, New York. She paid him $5,000 to commit the crime, which is why he demanded immunity before squealing. Now that he has said his piece, Napolitano stated:

The prosecutors will basically tell [Clinton’s] lawyers that they have evidence of the criminal behavior of their client and that before they present it to a grand jury, they want to afford Mrs. Clinton an opportunity … to challenge it.

This effectively puts her into a corner: If she declines, voters will conclude, finally and at last, that she does have something to hide after all. But if she agrees, those prosecutors, masters at their trade, will easily entrap her into repeating the lies she has used to cover her tracks up until now.

Wrote Napolitano: “If she were to talk to federal prosecutors and FBI agents, they would catch her in many inconsistencies, as she has spoken with great deception in public about this case.”

All she can do is delay making that decision. But November is still six months away, and in an election year that is a very long time indeed.

It’s possible, when all is said and done, that Trump will not be meeting Clinton in the general election, but instead her present saddle burr: far-left socialist Bernie Sanders. That could turn the election of 2016 into one reminiscent of 1932, the start of the New Deal, or the 1980 election with the burst of freedom following the election of Ronald Reagan.

In an election year full of surprises, that might be the biggest surprise of all.

attacks convention Corruption Crime Democrat Department of Justice Donald Trump Establishment Freedom Hillary Clinton Judge Andrew Napolitano justice Obama politics Republican Ronald Reagan Ted Cruz
This entry was posted on Wednesday, May 4th, 2016 at 1:07 pm and is filed under Politics. You can follow any responses to this entry through the RSS 2.0 feed. Both comments and pings are currently closed.
Many of the articles on Light from the Right first appeared on either The New American or the McAlvany Intelligence Advisor.