This article was published by The McAlvany Intelligence Advisor on Wednesday, May 4, 2016: 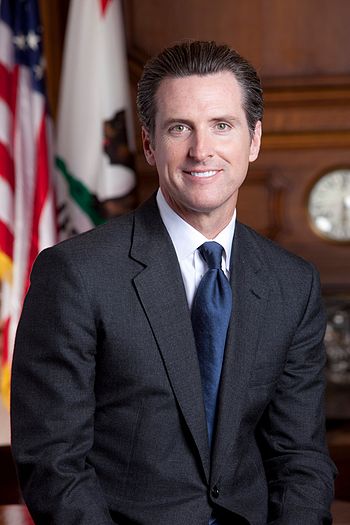 It’s often helpful to look into the background of a politician promoting a ballot issue on the chance that that look might reveal a hidden agenda. So it appears with California’s Lt. Governor Gavin Newsom. Last year he announced that he was creating a petition for some anti-gun legislation that, if successful, would appear on this year’s November ballot. Last week he announced that he had secured 600,000 signatures for his petition, more than enough for it to be on the ballot.

The agenda is right in line with the anti-gun mentality expressed by the state’s federal legislators Boxer and Pelosi, and is riding the momentum from the San Bernardino shooting.

Newsom, a career politician beginning in 2004 when he was elected the mayor of San Francisco, started out in the right political circles. His father was a state appeals court justice and an attorney for Getty Oil, owned by J. Paul Getty. His aunt was married to Ron Pelosi, the brother-in-law of Nancy Pelosi, while his father was close friends with Governor Jerry Brown, father of the state’s current governor.

Newsom’s early business activities were financed by one of J. Paul’s sons, Gordon, and the relationship blossomed over time, with Gordon providing the financing for at least 10 of Newsom’s early ventures. Gordon’s generosity extended to financial support for other Democrat candidates including Pelosi, former San Francisco Mayor Willie Brown, and John Kerry.

A year ago Newsom decided that his stint as Lt. Governor under the present governor, Jerry Brown, was sufficient to give him a head start to taking over from Brown in 2018 and announced his candidacy for that position.

That perhaps explains why, when he announced his petition to apply even more severe sanctions on California’s law-abiding gun-owning citizens, he decided to go after their ammunition as well, saying at the time “What makes guns dangerous is ammunition. Yet we don’t do background checks on ammo.” California would be the first state to pass such a law.

To buttress his argument he made some statements that caught the attention of Politifact, the fact-checking website. Said Newsom, ““There’s an average of 92 shootings a day in this country…. California can set the tone for the rest of the nation with these common-sense public safety provisions. We will lead the nation. We’ll be the only state in America with background checks on point-of-sale purchases of ammunition.”

In December Newsom doubled-down in an email he sent to supporters, saying “So far in 2015 there have been more mass shootings than days….” Researchers at Politifact wondered where he got his information when, based on congressional analysis of FBI data, from 1999 through 2013 there were about 21 mass shootings each year in the United States, not 300. Wrote Politifact: “We wondered: Did mass shootings in America somehow skyrocket from about 20 annually to more than 300 overnight? Or [was] Newsom … using a definition of this kind of crime that reflects a different view of reality?”

Newsom, it turns out, learned another law of politics: if you’re faced with simple incontrovertible facts, change the definitions in your favor, so the facts appear more favorable. And that’s what Newsom, the consummate politician, did. He used a website that reported there had been 353 mass shootings in the US so far that year. That website’s definition of mass shooting was vastly different than that used by Congress: it counted gang-related crimes and robberies, shootings by residents in their homes, and suicides. It also included any shootings where someone was wounded.

The problem with the way Gavin Newsom is using this pseudo data is it’s out of context and is done in such a way [that] is calculated to cause confusion. When people hear the term mass shootings, I think what they think of are things like the San Bernardino attacks or the Newtown crime…. By that definition, the number is far, far smaller.

The Florida office of Politifact wasn’t nearly as polite as Kopel:

Politicians or others who want to make a point about guns choose a set of data and a definition that reinforces the point they want to make. People who want more gun control tend to choose more expansive definitions.

Newsom is going for broke in his petition, putting in everything on the far-left’s wish list: Anyone buying or selling ammunition, whether a dealer or an individual, would have to undergo a background check. The petition also demands that the state set up a system to “recover” (read: confiscate) firearms bought legally by people who then suffered a conviction or a mental health issue or was involved in a domestic violence incident. It would require that guns that were stolen or lost be reported to local authorities. It would compel the state to provide that information to the federal NICS databases. And finally, to add insult to previous injuries, anyone legally owning a magazine with more than a 10-round capacity would be required to sell it to a federally licensed gun dealer, destroy it, or ship it out of state. In other words, if Newsom’s petition succeeds in November, law-abiding citizens owning those larger capacity magazines will automatically become criminals unless they comply with the new law.

There’s going to be some pushback, for sure, and one hopes that enough common sense still reigns in the Golden State to put an end to this attempt by Newsom to ride the bill into the governor’s office in 2018. John Lott, author of More Guns, Less Crime, weighed in on the issue: “The question is: Who are you stopping from owning a firearm or getting hold of ammunition? In this case it is law-abiding poor [people including] blacks and Hispanics who won’t be able to afford the cost of ammunition, which will rise with the cost associated with [enforcing the new legislation].”

Similar pushback came from Emanuel Kapelsohn, the vice-president of the International Association of Law Enforcement Firearms Instructors, who thinks criminals aren’t likely to abide by the new law: “I’m very skeptical of this approach. It’s a great idea in theory but do we think that gangbangers will go into a gun store and provide ID to get their ammo, or just go out on the street?”

As expected, gun rights groups like the NRA and California’s Firearms Policy Coalition are getting involved. But the real world of politics on the left coast bodes ill for their efforts. Instead, law-abiding gun owners are likely to find ammo in nearby states, or do some reloading of their own at home. And criminals will likely create and use a black market to give them all the ammunition they need.

Facts don’t matter to politicians like Newsom. What matters is the agenda, and riding it into the state’s highest office.

Bio of Gavin Newsom from Wikipedia

Bio of Gavin Newsom from IMBD.com

More on Newsom for SFGate: Newsom in Four Acts / What shaped the man who took on homelessness, gay marriage, Bayview-Hunters Point and the hotel strike in one year

Breitbart.com: Gavin Newsom: Ammunition ‘The Most Dangerous Part’ of a Gun

ammunition attack common sense Crime David Kopel Democrat facts firearms Gun Control magazine mental health Nancy Pelosi Newtown NRA politician rights War
This entry was posted on Wednesday, May 4th, 2016 at 12:55 pm and is filed under Politics, Second Amendment. You can follow any responses to this entry through the RSS 2.0 feed. Both comments and pings are currently closed.
Many of the articles on Light from the Right first appeared on either The New American or the McAlvany Intelligence Advisor.