This article appeared online at TheNewAmerican.com on Thursday, April 28, 2016:

When he announced Carly Fiorina (shown) as his running mate, Republican presidential candidate Ted Cruz said on Tuesday, “It’s unusual to make the announcement as early as we’re doing so. But this race, if anything, is unusual.”

Others viewed his decision to name former GOP candidate Carly Fiorina as his vice-presidential running mate in different terms. 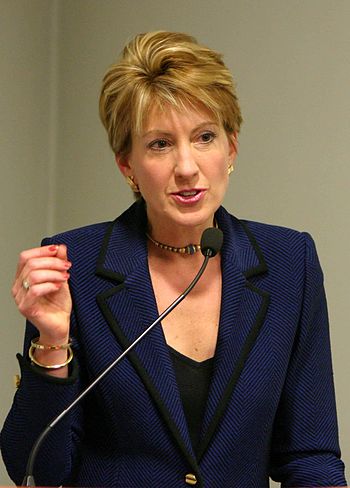 Some called it a “gambit,” a “last gasp,” and a “desperation move,” while Donald Trump called it “ridiculous” and “dumb.” However, Major Garrett, CBS News‘ Chief White House correspondent, called it a “very strategic response” to Trump’s resounding wins on Tuesday.

With just 563 delegates, Cruz has no direct way to wrest the nomination from Trump, with his 955, but he can, and apparently hopes to, keep Trump from receiving the delegates necessary to win on the first ballot at the Republican convention. (If that happens, all delegates are up for grabs.) With 502 delegates still up for grabs in the remaining state primaries, he thinks he might be able to pull it off.

Fiorina followed with this:

This is a fight for all of us, for our party, for our futures, for our children’s future. It isn’t over.

The key state, and possibly the final deciding contest, is Indiana, where, at present, Trump leads Cruz 39-33.

This is the second Hail Mary pass Cruz has tossed in the last couple of weeks, the first being the last-minute agreement with John Kasich to have Kasich step aside in Indiana, giving Cruz the opportunity, perhaps the final one, to go toe-to-toe with Trump. That agreement apparently had little effect last Tuesday when Trump swept every state, including every county in every state.

Fiorina’s moderate views on critical issues may serve to soften Cruz’s constitutional stands with voters not interested in or concerned about how closely a politician hews to the Constitution’s restrictions and limitations. When quizzed about abortion during her 2010 race for the U.S. Senate in California, Fiorina deflected, saying, “It is not an issue that I’m running on.” On China she only said that its economy grew mostly because if its theft of American technology, that “they’re not entrepreneurial, they don’t innovate, that is why they are stealing our intellectual property.”

She favors continuing foreign aid because the United States “cannot disengage” from the world. On immigration she favors the amnesty proposal crafted by the Gang of Eight (one of whom was former GOP presidential candidate Marco Rubio), telling NBC’s Meet the Press, “I applaud and salute the Gang of Eight’s proposal. Let’s move forward and vote on that.”

On international terrorism and ISIS, Fiorina thinks the United States can and should do more in the fight, explaining, “There are a whole set of things we’ve been asked to do [in that fight] by our allies … and we’re not doing any of them.” When quizzed about her decision, while head of Hewlett-Packard, to send truckloads of computers to the NSA following the 9/11 terrorist attacks, she said, “I advised both the CIA and the NSA to be as transparent as possible about everything they were doing” which, presumably, was her oblique way of expressing concern about possible Fourth Amendment infringements of Americans by those agencies using her company’s computers.

On same-sex “marriage” and religious liberty, Fiorina waffled, holding that the Supreme Court’s decision was now the law of the land and saying, “I wouldn’t support an amendment to [overturn] it” adding that “the government shouldn’t discriminate in how it provides benefits, and the people have a right to their religious freedoms.”

She takes a middle-of-the-road position on the TPA and TPP, saying only, “I believe that free and fair trade [gives] advantages [to] the U.S. but I am very uncomfortable with [these] deal[s].”

Whether the last minute toss by Cruz into the end zone saves his campaign remains to be seen. Not every Hail Mary fails. During the 2016 playoffs, Green Bay Packers’ quarterback Aaron Rodgers threw a 41-yard pass into the end zone as time was expiring. Packer receiver Jeff Janis jumped over the heads of Arizona Cardinals’ defenders Patrick Peterson and Rashad Johnson and caught the ball, tying the game and forcing it into overtime.

However, the odds of Cruz’s last-minute decision to name Fiorina as his running mate turning next Tuesday’s Indiana primary in his favor are between slim and none. With a Trump win there, it’s over for Cruz and Fiorina.

Abortion attacks Constitution convention Donald Trump Economy Fourth Amendment Freedom immigration Liberty Marco Rubio media politician Republican Senate Supreme Court Ted Cruz Terrorism
This entry was posted on Friday, April 29th, 2016 at 4:50 am and is filed under Constitution, Politics. You can follow any responses to this entry through the RSS 2.0 feed. Both comments and pings are currently closed.
Many of the articles on Light from the Right first appeared on either The New American or the McAlvany Intelligence Advisor.