This article appeared online at TheNewAmerican.com on Thursday, March 17, 2016: 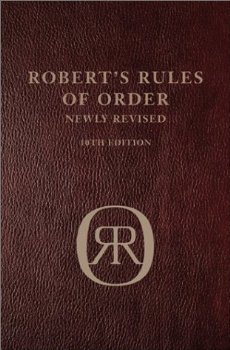 Solomon Yue, one of the 168 members of the Republican National Committee (RNC) from Oregon, has promised to present a startling proposal to the RNC Standing Rules Committee when it meets in April: toss the archaic, contentious, 1,500-page RNC rule book in favor of Robert’s Rules of Order: “To make the convention more transparent, I will advocate … adoption of Robert’s Rules of Order to replace the 1,500-page U.S. House rules to govern the convention.”

Yue is already picking up support for the idea, including that of Kansas RNC member Helen Van Etten, who said that “our party’s grass roots have been using [it] to conduct business at the county party, state party and national party levels for many years. Unlike the 1,500-page U.S. House rules, there are, in Robert’s [Rules], no surprises that will [cause] the kind of chaos [the national] media are predicting.”

Robert’s Rules has been used by civic associations, county boards, and state legislatures for years and, as noted by Ralph Hallow of the Washington Times, would “head off arcane maneuvers designed to deny Donald Trump the presidential nomination … to make it hard to forge in secrecy what voters might see as backroom deals to ‘steal’ the presidential nomination from Mr. Trump, the front-runner.”

Included in RNC’s massive rule book is the “arcane” rule 40b, adopted by the Romney campaign in 2012 essentially to squelch any opposition from delegates committed to Ron Paul. As Joe Wolverton wrote in The New American at the time: “Maine’s Ron Paul delegates were roughly shoved out of the Republican Party’s quadrennial convention, and as a result of events surrounding the proposal and adoption of new rules to govern the presidential nomination process, every potential Republican presidential candidate with a message that doesn’t parrot the party line has been effectively ostracized. Forever.”

That rule says that only candidates with a majority of delegates from at least eight states can be nominated and put to a vote. In 2012, that ended Paul’s run, but it doesn’t apply in 2016 thanks to Trump’s successes across the land.

Back in December the GOP insiders attended a secret dinner held by RNC Chairman Reince Priebus, the details of which were leaked to the Washington Post by five people who were “familiar” with the meeting. In attendance were Republican Senate Majority Leader Mitch McConnell; Ward Baker, executive director of the National Republican Senatorial Committee; Rob Simms, his counterpart at the National Republican Congressional Committee; Ron Kaufman, a RNC committee member and advisor to Mitt Romney; and Whit Ayres, an advisor to Senator Marco Rubio. Also in attendance was Vin Weber, an ally of former Florida Governor Jeb Bush.

Speaking anonymously, the five confirmed the anxiety being felt by the GOP establishment at the recent and continuing success of the outsider, Donald Trump, and began to lay plans for handling a brokered convention if Trump failed to win on the first ballot. One topic was the 1976 Republican convention where Ronald Reagan challenged Gerald Ford on the floor prior to Ford’s winning the party’s nomination.

Another topic was Trump’s admitted ability to make back-room deals if that becomes necessary. Trump himself has admitted that he’ll be working at a disadvantage, not because of his ability to negotiate, but because the deck is stacked against him:

Even Morton Blackwell, one of those members of the RNC, who has attended every GOP convention since 1972, tried to change Rule 40b at a meeting back in January, but without success: “I attempted at the RNC’s January 2016 meeting in Charleston, South Carolina, to correct this outrageous, unfair, and counterproductive 2012 Romney power grab. I came close [but failed.]”

Blackwell reviewed just how the old-boy insider network works in order to make rules that keep insiders in power, concluding that they have the power, if they care to exercise it, to keep Trump from gaining the nomination.

And that is the key question. Not whether they will seriously consider tossing the rulebook in favor of Robert’s Rules, but whether they are willing to risk the scandal and the anger erupting from delegates favoring Trump when they discover, as Ron Paul’s people did in 2012, that they have had their right to vote at the convention neutered or eliminated altogether, thanks to some last-minute rule change.

convention Donald Trump Establishment Mitch McConnell Mitt Romney party line Republican Ron Paul Ronald Reagan Scandal secret War
This entry was posted on Friday, March 18th, 2016 at 5:28 am and is filed under History, Politics. You can follow any responses to this entry through the RSS 2.0 feed. Both comments and pings are currently closed.
Many of the articles on Light from the Right first appeared on either The New American or the McAlvany Intelligence Advisor.