Evidence Mounts for U.S. Recession in 2016

This article appeared online at TheNewAmerican.com on Monday, March 14, 2016:

Nearly everyone with an opinion is warning about the increasing probability of the United States entering a recession — two quarters of negative growth — before the end of the year. 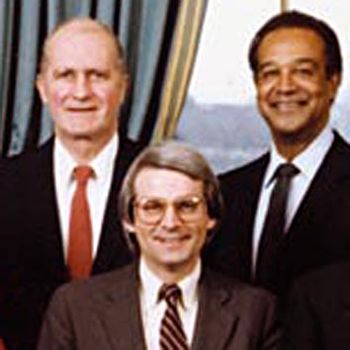 President Ronald Reagan’s former budget director David Stockman (middle, left) has been negative on the economy for months, noting in early February that earnings per share for the companies making up the Standard & Poor’s 500 Index have been declining and “are certain to be down [further] in the current quarter.” Based on the most recent reports, those earnings per share (EPS) have already declined by more than 14 percent since the peak, “replicating the exact pattern which occurred during the 2007-2009 collapse.”

Moody’s Analytics reports that four states are already in recession: Alaska, North Dakota, West Virginia, and Wyoming, with three more on the edge: Louisiana, New Mexico, and Oklahoma. Not all of these are suffering from the decline in oil prices, either. Louisiana is suffering from a contraction in manufacturing along with Illinois, Wisconsin, and Mississippi, each of which has had economic declines in the past few months.

Fed Chair Janet Yellen added during testimony on February 10, “There would seem to be increased fears of recession risk. We’ve not yet seen a sharp drop-off in growth, either globally or in the United States, but we certainly recognize that global market developments bear close watching.”

Indeed they do. Japan is currently in a recession, and unless the communist/Keynesian leaders running China’s economy are able to pull off a miracle, China will shortly join her.

Zero Hedge weighed in with its report that more than 70 percent of regions tracked worldwide saw manufacturing sentiment deteriorate in February compared to January. Chris Williamson, the chief economist at Markit, a global financial services giant located in London, added:

The February data add to signs of distress in the US manufacturing economy. Production and order book growth continues to worsen, fed by falling exports. Jobs are being added at a slower pace and output prices are dropping at a rate not seen since mid-2012.

U.S. unemployment numbers have always been squishy, according to Michael Snyder: “No matter what Obama may say, unemployment remains a major problem in the United States.… Unemployment rates in 36 states are higher [now] that they were just before the last recession hit in 2008.”

Adding to concerns about the U.S. economy is the European situation, which has deteriorated so much that the European Central Bank (ECB) is implementing quantitative easing with such aggression that interest rates are in danger of going negative. That translates to de facto theft from those with interest-bearing checking and savings accounts.

On Monday economists at Morgan Stanley officially announced that chances for a recession have risen to 30 percent, up from Bloomberg’s estimate of 20 percent just a month ago. Said the bank’s strategists: “Weaker growth forecasts and rising political risk lead us to close our positive tactical stance and lower exposures to global equities. The probability of a global recession has risen.… Our economists put the probability of a global recession at 30%, the highest of this cycle.”

One of the most reliable evidences portending the economic outlook for the United States is data that come not from the Bureau of Labor Statistics but from the U.S. Treasury: its daily report of federal receipts of payroll withholding taxes. It covers all U.S. employers and is not subject to massaging or manipulation. John Williams of ShadowStats.com has tracked the history of that data and has graphed the year-over-year change in every four-week series of that otherwise highly variable data.

Lee Adler, of the Wall Street Examiner, analyzed the Treasury data that Williams provided and concluded:

The annual rate of change in withholding taxes has grown increasingly negative … for more than a month. Following on the heels of a weak December, it is a clear sign that the US has entered a recession.… February looks much worse in the early going.

The best evidence reveals that the next recession may already be here.

danger Economy growth Interest Rates Keynesian North Dakota Oil Prices Quantitative Easing Recession Ronald Reagan Student Loans Unemployment
This entry was posted on Tuesday, March 15th, 2016 at 5:37 am and is filed under Free Market. You can follow any responses to this entry through the RSS 2.0 feed. Both comments and pings are currently closed.
Many of the articles on Light from the Right first appeared on either The New American or the McAlvany Intelligence Advisor.