Business Owner Requires Employees to Carry in the Office

This article appeared online at TheNewAmerican.com on Thursday, February 25, 2016: 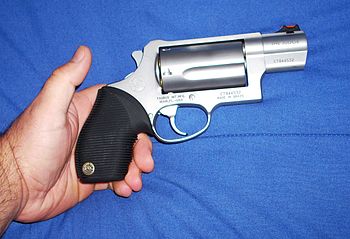 After WSBTV aired the story of a business owner in the Atlanta Metro area who requires all of his employees to get a permit and carry a firearm in the office for self-defense, it went viral and reporters inundated him with questions as to his reasoning.

One of his employees, Mary Brannon, has been with Toland for nearly 30 years and was about to retire. Also an NRA instructor, Brannon talked with Toland about how his employees could best protect themselves in the future. Brannon has been carrying in the office for decades, and Toland asked, “Who’s going to protect the office? If I’m not here and Mary’s gone, what are the other ladies going to do?” He decided it was time to require everyone else to do the same: “This is a group of very, very professional women, well-educated, pilots…. They all had their concealed carry permits within 3 to 4 weeks of me announcing that this something you had to do.”

Upon obtaining their permits, Toland presented them with a Taurus Judge five-shot revolver chambered for the .410 shot shell and the .45 Colt cartridge. The only complaint so far, according to Toland, is that one of his employees wondered if it came in pink. No. Only blue or stainless steel. Sorry.

When a reporter from the Daily Beast asked Toland about his decision, he said, “We want to be responsible with gun ownership, and Heaven forbid that we ever have to use it. Instead of using it, you could diffuse a situation. As more people arm themselves, women in particular, the world’s going to be a safer place.”

In 1998, a female insurance agent in Zebulon, just a few miles away from Toland’s main office, was murdered in her office. In addition, Toland’s uncle, a World War II veteran, was murdered in Griffin, the site of one of his administrative offices, the one day when he wasn’t carrying. A recent rash of home invasions in the area pushed Toland to make the announcement to his employees six months ago.

There are rules, of course, along with the obvious advantages. By requiring new hires to have already obtained their concealed-carry permits, Toland knows that they have passed a background check, and have gone through some training. “It’s also a measure of an individual’s attitude towards responsible gun ownership and being a steward of our Second Amendment rights,” added Toland.

The rules include a commitment to use their sidearm if necessary, but only if necessary. One of Toland’s agents, Andrea Van Buren, explained, “As long as they are willing to get the training, become an expert … if you pull it out, you have to be willing to use it.”

Toland said: “It’s controversial to some people. They like to bring up story after story of gun violence. But a responsible, level-headed, law-abiding citizen with proper training can safely carry a firearm to protect themselves and others…. If they have a weapons permit, they’re very responsible. It’s a safer workplace. Everyone is essentially backing everyone else up.”

In fact, Toland’s customers think his decision is the right one, with many of them giving him high-fives because of it. One of them is Donald Trump.

Toland selected The Judge, Taurus’ best-selling firearm, because the .410 shot shell fires four 000 buckshot pellets, proven useful in close encounters without endangering others standing nearby or behind a potential attacker. Toland calls it “a 5-shot .410, just like a shotgun [but I] call it a hand cannon.” Taurus calls it The Judge “because of the number of judges who carry it into the courtroom for their protection … it is ideal for short distances, where most altercations occur.”

Bass Pro Shops sells The Judge for $549.99, but Toland likely gets a discount since he has 12 employees. Unfortunately, Taurus doesn’t make them in pink. At least not yet.

attack Concealed Carry Crime defense rights Second Amendment violence weapons
This entry was posted on Friday, February 26th, 2016 at 6:34 am and is filed under Crime, Second Amendment. You can follow any responses to this entry through the RSS 2.0 feed. Both comments and pings are currently closed.
Many of the articles on Light from the Right first appeared on either The New American or the McAlvany Intelligence Advisor.