The Fix Is In: Hillary Will Be the Democratic Party’s Nominee in November

This article was published by The McAlvany Intelligence Advisor on Monday, February 22, 2106: 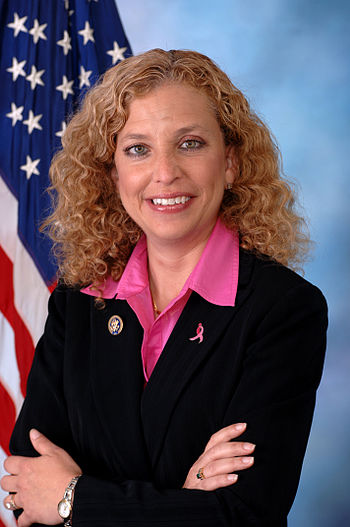 When Democratic National Committee Chair Debbie Wasserman Schultz (see above) was asked to explain how the “superdelegates” work in Democratic politics, this was the best she could do:

Well, let me just make sure that I can clarify exactly what was available during the primaries in Iowa and in New Hampshire. The unpledged delegates are a separate category. The only thing available on the ballot in a primary and a caucus is the pledged delegates, those that are tied to the candidate that they are pledged to support. And they receive a proportional number of delegates going into the — going into our convention.

Unpledged delegates exist really to make sure that party leaders and elected officials don’t have to be in a position where they are running against grass-roots activists.

Liz Shield, writing at PJ Media, did much better, calling them the “special sauce” that the party uses to swing the election to the preferred candidate, regardless of what the “grass roots” folks want:

The superdelegate is a party official, usually a politician, elected official, or party loyalist, who has more weight as a delegate than the average democratically-determined delegate. The Democrats are the party of “some animals are more equal than others,” if nothing else, and nowhere is that more evident than regarding their superdelegates.

That explains why, after just three primaries, Hillary Clinton holds a seven-to-one advantage over Sanders, 502-70, despite her winning in Nevada but barely squeaking by him in Iowa and getting royally spanked by him in New Hampshire.

Those “superdelegates” reward the party hacks with one-sixth of the 4,763 delegates headed to the DNC party in Philadelphia in July, enough to head off any challenge from anyone, like Sanders, who might upset the Democratic apple cart. Those enjoying Shield’s “special sauce” include:

+ 20 Democratic governors, including territorial governors and the Mayor of Washington, DC;

+ 47 Democratic members of the U.S. Senate, including the “shadow” senator from Washington, DC;

+193 Democrat members of the U.S. House of Representatives; and

Of these, 502 have already pledged themselves to vote for Clinton in June.

In case anyone in the party fails to get the message, there’s always the power of the purse. Since the DNC overturned a ban introduced by Barack Obama in 2008 restricting donations from super PACs, money has been pouring into the DNC’s coffers. And those funds are being blatantly used to buy “superdelegates” who might otherwise be wavering.

A single example will suffice: According to Bloomberg, the New Hampshire Democratic Party received $124,000 from the Hillary Victory Fund. Conveniently, six out of six superdelegates in the state dutifully pledged to Hillary while 60 percent of the primary vote went to Sanders.

And just who is doing the pouring? The usual suspects, including George Soros, Haim and Cheryl Saban, and Daniel Abraham, have each given $300,000 or more to Hillary’s Victory Fund, allowing Hillary to secure the nomination well in advance of July.

The contest is over. Hillary will be the nominee. Everything else is just Kabuki theatre.

The Observer: How the DNC Helps Clinton Buy Off Superdelegates

MarketWatch.com: Opinion: The math adds up to Clinton versus Trump

Bio on Haim and Cheryl Saban

convention Democrat Establishment George Soros Hillary Clinton Obama politics
This entry was posted on Tuesday, February 23rd, 2016 at 1:26 pm and is filed under Crime, Politics. You can follow any responses to this entry through the RSS 2.0 feed. Both comments and pings are currently closed.
Many of the articles on Light from the Right first appeared on either The New American or the McAlvany Intelligence Advisor.