Christopher Booker Remembers the Man Behind the Paris Conference

This article was published by The McAlvany Intelligence Advisor on Monday, December 14, 2015: 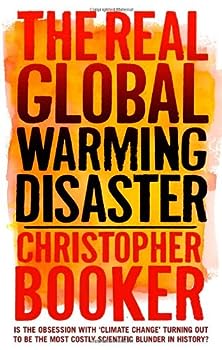 Amazon touts Christopher Booker’s book, The Real Global Warming Disaster, by calling it an exposure of “the mother of all environmental scares: global warming.” Booker, a Londoner and one of the original climate change deniers, was surprised to learn who the “father” of global warming was:

When I was researching for [my] book … charting how the late-20th-century panic over climate change came about, few things surprised me more than to discover the absolutely central role played in the whole story by a Canadian socialist multimillionaire, Maurice Strong.

During the Second World War, having emerged from humble origins in the Great Depression, Strong became convinced that the new United Nations should become a world government, dedicated to ensuring that the wealth enjoyed by the richer countries of the West should be spread out around the world’s underprivileged majority.

Strong had some help from a very influential individual, David Rockefeller. Following the war Strong took a clerical position at the UN and met Rockefeller, who immediately saw in Strong his potential to help Rockefeller obtain his dream: a world government. In his autobiography, Memoirs, Rockefeller was forthright about that dream:

For more than a century, ideological extremists at either end of the political spectrum have seized upon well-publicized incidents to attack the Rockefeller family for the inordinate influence they claim we wield over American political and economic institutions.

Some even believe we are part of a secret cabal working against the best interests of the United States, characterizing my family and me as “internationalists” and of conspiring with others around the world to build a more integrated global political and economic structure – one world, if you will.

If that’s the charge, I stand guilty, and I am proud of it.

Strong returned to Canada where, using his prodigious talent and connections provided by Rockefeller, he became wealthy in the oil and gas industry. He returned to the United Nations to become the Secretary General of the UN’s Conference on the Human Environment, and then the first executive director of the United Nations Environment Program (UNEP). In 1971 he commissioned a report on the state of the planet, Only One Earth, which prepared the way for him to head up the Stockholm Conference, the world’s first environmental conference, in 1972.

Twenty years later he led the Earth Summit in Rio de Janeiro, which he considered a failure in that the conferees agreed to fund less than five percent of the $125 billion he wanted to begin to solve the “problem” of global warming. But it began the Agenda 21 program and laid the groundwork for the Kyoto Protocol, which was adopted five years later by 192 countries. That placed an obligation on the signees to begin to reduce greenhouse gases based on the controversial idea that they are responsible for the alleged warming of the earth.

In his activist life Strong co-chaired the Earth Charter Commission whose charter called for “global interdependence” to solve the global warming problem. The idea emanated from Strong and Mikhail Gorbachev, the former Soviet Union’s General Secretary of the Communist Party, who at the time were both members of the Club of Rome.

This writer considers the Club of Rome to be the starting point for the environmental movement, using global warming (now climate change) as the perfect cover to build a world government. The Club’s founding statement is revealing:

The common enemy of humanity is man.

In searching for a new enemy to unite us, we came up with the idea that pollution, the threat of global warming, water shortages, famine and the like, would fit the bill.

All of these dangers are caused by human intervention, and it is only through changed attitudes and behavior that they can be overcome.

The real enemy, then, is humanity itself.

Following his stint at the Earth Charter Commission, Strong chaired the World Resources Institute and served on the board of the International Institute for Sustainable Development and the Stockholm Environment Institute, among many others.

Each of these expressed in one form another Strong’s socialist ideology and worldview. During his reign at UNEP, the group issued a report that stated:

Private land ownership is a principal instrument of accumulating wealth and therefore contributes to social injustice. Public control of land use is therefore indispensable….

Public ownership of land is justified in favor of the common good, rather than to protect the interest of the already privileged.

It is clear that current lifestyles and consumption patterns of the affluent middle-class … involving high meat intake, consumption of large amounts of frozen and “convenience” foods, ownership of motor vehicles, numerous electrical appliances, home and workplace air-conditioning [and] expensive suburban housing … are not sustainable….

A shift is necessary toward lifestyles less geared to environmentally damaging consumption patterns.

We may get to the point where the only way of saving the world will be for industrialized civilization to collapse.

Isn’t it our responsibility to being this about?

All that was needed was the instrument Strong lacked: the mechanism of force to pry private property from the hands of its rightful owners. Enter Strong’s Earth Charter, which, Strong wrote, would not “be subservient to the rules of state sovereignty, demands of the free market, or individual rights.” He added:

It is simply not feasible for sovereignty to be exercised unilaterally by individual nation-states, however powerful. It is a principle which will yield only slowly and reluctantly to the imperatives of global environmental cooperation.

The problem with the Earth Charter, according to Strong, was its “almost total lack of capacity for enforcement.”

This is the background of and the purpose behind the Paris conference just ended. It’s the 21sttime the totalitarians hiding behind the scare of global warming have tried to fasten world government upon an unsuspecting citizenry. Obama was overjoyed, of course. The climate-changer-in-chief chortled at the conference’s “success” in passing the latest agreement:

I believe this moment can be a turning point for the world. We’ve shown that the world has both the will and the ability to take on this challenge.

Obama had the audacity to take credit for all the work that Strong and his enablers had been doing behind the scenes for decades:

Today, the American people can be proud – because this historic agreement is a tribute to American leadership. Over the past seven years we’ve transformed the United States into the global leader in fighting climate change.

The only trouble with that outburst of self-congratulatory excess is that the American people aren’t buying what he and Strong have been selling. In a report published last year by Ipsos Mori, a market research firm in London, there are more climate change deniers in the United States as a percentage of population than any other country on the planet. What makes that remarkable is that the United States has, since the birth of the environmental movement in 1968, been the target of people like Strong and Obama and their enablers at the United Nations. They know full well that, without the United States being willing to give up essential liberty and sovereignty, the environmentalists’ totalitarian goals of a one world government will remain just a fevered dream.

Republican Senator Jim Inhofe of Oklahoma was unmoved by either Obama’s hype or the conference agreement itself:

The news remains the same. This agreement is no more binding than any other “agreement” from any conference of the parties over the last 21 years. Senate leadership has already been outspoken in its positions that the United States is not legally bound to any agreement setting emissions targets or any financial commitment to it without approval by Congress.

That approval is increasingly unlikely, thanks to the efforts of many, including Christopher Booker and his efforts to expose the fraud and the deceit behind the “global warming”/“climate change” scare.

Ironically, Strong was not able to attend his creation this year in Paris. He died three days before it opened, at age 86.

Background on the global warming controversy

Farewell to the man who invented ‘climate change’: Maurice Strong

The New American: Is Global Warming a Hoax?

Background on the Earth Summit in 1992

Background on the Kyoto Protocol

Background on the Earth Charter

Background on COP21 conference in Paris

Fox News: At the United Nations, the Curious Career of Maurice Strong

Background on the Club of Rome

This entry was posted on Monday, December 14th, 2015 at 11:50 am and is filed under History, Politics. You can follow any responses to this entry through the RSS 2.0 feed. Both comments and pings are currently closed.
Many of the articles on Light from the Right first appeared on either The New American or the McAlvany Intelligence Advisor.