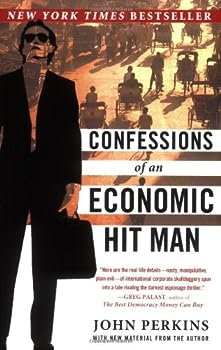 Citizens weren’t impressed and lined up to withdraw their money from banks before the bank closure was announced. They were also stripping the shelves of grocery stores and filling up their cars, just in case Sunday’s vote meant more than Tsipras said it would.

This is the inevitable end game of easy money and credit made available to Greek politicians after the country voted to join the European Union in 1981. It was aided and abetted by economic “hit men,” such as John Perkins (author of Confessions of an Economic Hit Man in 2004), who persuaded those politicians that “investments” using borrowed money would easily be paid back from the reviving economy resulting from those investments. His job was to convince them to accept enormous loans from the ECB and the IMF for infrastructure development. When the vastly overstated economic returns failed to materialize, those hit men became enforcers, imposing draconian terms to assure the hapless citizens would repay the debt. When those debts became so large as to become impossible to repay, the stakes were raised further: Sell off government assets and give up essential national sovereignty.

When asked about his role as an economic hit man, Perkins explained:

Once we identified these countries, we arranged huge loans to them, but the money would never actually go to the countries. Instead, it would go to our own corporations to build infrastructure projects in those countries, things like power plants and highways that benefitted a few wealthy people … but not the majority of people who couldn’t afford [them]. They were left holding a huge debt, very much like what Greece has today, a phenomenal debt.

When those countries failed to make payments, the pressure was increased:

We would go back, usually in the form of the IMF — in the case of Greece today, it’s the IMF and the EU — and make tremendous demands on the country: increase taxes, cut back on spending, sell public sector utilities [to us], things like power companies and water systems, transportation systems.

[Greece] would basically become a slave to us, to the corporations, to the IMF, organizations like the World Bank.

Whether he could see that this would be how his dream of a united Europe would play out, or not, the founding father of the European Union, Jean Monnet, would no doubt be pleased. At the end of the First World War Monnet presented his plan for a united Europe at the Paris Peace Conference in 1919, proposing a “new economic order.” The Allies rejected his plan in April, but Monnet, president of the High Authority of the European Coal and Steel Community, was undaunted. In 1943, Monnet spoke to the French National Liberation Committee, pushing his plan:

There will be no peace in Europe if the states are reconstituted [after the war] on the basis of national sovereignty.…

The countries of Europe are too small to guarantee their peoples the necessary prosperity and social development. The European states must constitute themselves into a federation.

His Monnet Plan, offered in 1945, morphed over time into today’s European Union, with the same goal in mind. Economic cooperation through the new currency, the euro, would eventually be replaced with a political union, replacing national sovereignty with a regional government-run by unelected officials unconnected directly to the citizens of those once-sovereign states. In other words, a regional governmental dictatorship without restraint or accountability.

Regardless of how Sunday’s election turns out, Monnet’s dream is ending badly. Even London’s Financial Times, the mouthpiece for the English establishment, has all but given up on the idea, thanks to the pushback against it by Tsipras. As Gideon Rachman wrote on Monday:

The shuttered banks of Greece represent a profound failure for the EU. The current crisis is not just a reflection of the failings of the modern Greek state, it is also about the failure of a European [Monnet’s] dream of unity, peace and prosperity….

The current crisis could easily lead to the country leaving the euro and eventually the union itself. That would undermine the fundamental EU proposition: that joining the European club is the best guarantee of future prosperity and stability.

As the lockdown of banks in Greece intensifies the pressure on hapless citizens caught in the middle, the number of them opposed to the troika’s terms will likely narrow further, but it doesn’t really matter. The damage has been done. The damage is likely to be fatal to Monnet’s dream. Concluded Rachman:

If the Greek people vote to accept the demands of their EU creditors … Greece may yet stay inside both the euro and the EU.

But it will be a decision by a cowed and sullen nation. Greece would still be a member of the EU. But its European dream will have died.

dictatorship Establishment European Central Bank European Union Greece IMF Pension Polls power Sovereignty World Bank
This entry was posted on Friday, July 3rd, 2015 at 5:06 am and is filed under History, Politics. You can follow any responses to this entry through the RSS 2.0 feed. Both comments and pings are currently closed.
Many of the articles on Light from the Right first appeared on either The New American or the McAlvany Intelligence Advisor.