Genie Out of the Bottle: Nullification Efforts are Gaining Momentum

This article first appeared at The McAlvany Intelligence Advisor on Monday, May 11, 2015: 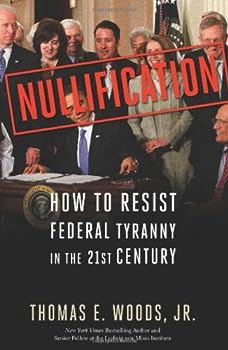 Once perceived to be invincible, government bureaucrats issuing decrees and mandates from on high are being exposed for what really are: Wizards of Oz. It was Tom Woods’ book, Nullification: How to Resist Federal Tyranny in the 21st Century that let the genie out of the bottle.

All Woods did was explain how the founders intended for the states to be the last line of defense against federal overreach. It put in place the Bill of Rights which contains the Tenth Amendment:

The powers not delegated to the United States by the Constitution, nor prohibited by it to the States, are reserved to the States respectively, or to the people.

Whensoever the General Government assumes undelegated powers, its acts are unauthoritative, void, and of no force.

What surprised many was how the federal paper tiger folded when confronted. Its perception didn’t match its reality, and now that the fraud has been exposed, the genie is out of the bottle: nullification at the state level is not only working, it is gaining momentum almost daily.

What galled lawmakers the most was the FDA’s condescension. It ruled that experimental drugs were off-limits until they were approved. And then it made an exception: People with life-threatening diseases would be allowed to have access to those drugs, but only with express written approval from the FDA in advance.

The Tenth Amendment Center saw what is happening:

This “clear model” is lighting the way. Minnesota is the 16th state to nullify this FDA rule, while more than 20 other states are considering slamming the door on the agency as well.

According to the Center, there are more than 200 bills in the various states designed to rein in federal overreach on everything from gun control to marijuana to militarization of local police to indefinite detention under the NDAA. Twelve states are challenging federal surveillance authority illegally granted to the National Security Agency (NSA), while another 12 states are considering bills to legalize marijuana, be it medical or recreational, or both.

Three states – California, Michigan, and Virginia – have already passed some form of anti-indefinite detention laws to nullify the powers granted by the National Defense Authorization Act (NDAA), while seven more states are considering such nullification of that federal act.

Two states have blocked federal militarization of police: New Jersey, with a law requiring local approval, and Montana, with an outright ban on any law enforcement agency receiving military equipment from the federal government. Two more states, Massachusetts and Minnesota, are close to passing similar measures.

Most states’ ire has been directed at ObamaCare: 47 out of the 50 states have considered bills to “limit, alter, or oppose selected federal actions” related to the healthcare law, according to the National Conference of State Legislatures.

When Toto pulled back the curtain on the almighty invincible Wizard of Oz, he exposed the wizard for the fraud that he had been all along. Protestations to “ignore the man behind the curtain” were of no avail. Dorothy called him out, and the game was over.

As more and more state legislators discern the impotence of the bureaucrats hiding behind the curtain, momentum grows for nullification by the states.

Thanks to Professor Tom Woods who rubbed the bottle back in 2010.

Tenth Amendment Center: 16 and Counting: Minnesota Bill to Nullify in Practice Some FDA Restrictions on Terminally-ill Patients Signed Into Law

Nullification: How to Resist Federal Tyranny in the 21st Century, by Thomas Woods

The Hill: States rise up against Washington

Bill of Rights Constitution Federal Government mandates marijuana Nullification power rights Tenth Amendment
This entry was posted on Thursday, May 21st, 2015 at 5:07 am and is filed under Constitution, History. You can follow any responses to this entry through the RSS 2.0 feed. Both comments and pings are currently closed.
Many of the articles on Light from the Right first appeared on either The New American or the McAlvany Intelligence Advisor.