Detroit is Proving John Lott Correct After all

This article first appeared at The McAlvany Intelligence Advisor on Friday, August 1, 2014: 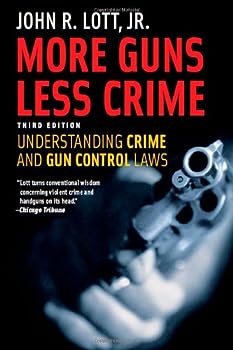 John Lott’s updated version of More Guns, Less Crime confirms what his previous editions already showed: an increasing number of people familiar with, skilled at arms with, and willing to defend themselves with, sidearms, results in a safer, more secure and lower crime environment. Without saying as much, Detroit’s Police Chief James Craig’s announcement on Wednesday proves the point: more guns, less crime.

Craig’s only been there a year but his three decades of law enforcement experience in places as diverse as Maine and California are already beginning to be felt. Since he came on board last July, Detroit has seen a 37 percent drop in robberies, a 22 percent drop in home- and business-invasions by criminals, and a 30 percent decline in carjackings

The logic is faultless. Here’s what Al Woods, a Detroit resident and a reformed street criminal, said:

If I was out there now robbing people these days, knowing there are a lot more people with guns, I know I’d have to rethink my game plan.

Massad Ayoob puts it slightly differently: street criminals are being forced to refine their “victim selection” process. Those carrying don’t make very attractive targets. And that process is complicated not only by not knowing who is carrying, or not, but also by not knowing how many are, or are not. In Detroit those carrying have increased greatly in just the last two years. In 2013 some 6,974 Detroiters have been issued concealed carry permits, on top of the 7,584 who were issued them in 2012. All total, there are more than 30,000 residents who now carry concealed in a population of 900,000.

And that number continues to grow. In states like Georgia, for example, or Texas, where concealed carry has been an accepted state of affairs for years, the percentage of the populace carrying is pushing five percent, sometimes more. According to Fox News, in 10 states with concealed carry laws, it’s more than eight percent. Eight percent of 900,000, if Detroit holds true to that statistic, means that eventually more than 70,000 citizens will be able to defend themselves against an attack.

The situation in Detroit was so bad when Craig took over last July that there really was nowhere for him to go but up. 1,000 police officers had been laid off due to budget cuts over the last five years, bringing Craig’s department down to less than 2,300 LEOs (law enforcement officers) in a city of nearly a million souls. Many of them had seen their salaries cut and their hours extended. Their equipment was dated, and limited. They only had 1,200 vehicles, including motorcycles, and most of them were more than ten years old (the normal life for Ford Crown Vics is just three years).

Craig started to work. The first thing he did was to reduce the officers working as the mayor’s guard, from 23 to 6. He found a vast surplus of upper management desk jockeys, so he eliminated them: retire, or hit the streets. Most of them hit the streets, so that Craig didn’t have to fire anyone.

He pressured Detroit’s interim financial manager Kevyn Orr to give him $36 million to help him upgrade his force. He was blessed with 100 new police vehicles from GM, Ford and Chrysler as a gift, and has 20 freshly minted police academy graduates entering his force this month.

But what Craig has really brought to the table is a determination to fix the problem. During his commencement address last summer, Craig said:

No longer will we stand idly by as criminals run rampant and the good citizens are held captive in their own homes.

We have taken an oath to protect our citizens and protect them is what we will do.

Prior to his arrival precincts were closed by 4PM. He opened them to regular working hours. He has put more officers on the street and in vehicles and the average response rate to emergency calls has dropped to just 11 minutes. The “clearance” rate on homicides has jumped back up to normal. Craig explained:

There’s no magic to it. The community, coming in the door, when I got here, had no confidence in the Detroit Police Department … the reason why is because, if they can’t call us for help they’re not going to [call].

That’s part of what is going on here. Confidence is returning, people are talking to us.

He told Allan Lengel of Deadline Detroit in an interview just what he thought about the situation when he took over:

It was the greedy, dirty, corrupt, status-quo politicians that destroyed this city….

I think it’s good for people to protect themselves, their families and, when necessary, protect someone from an imminent threat to their lives or facing great bodily injury.

I’m not an advocate of violence. I do not promote vigilantism. I promote life, I promote non-violence … I promote law-abiding citizens who are eligible to get a concealed weapons license, who are trained and responsible when face with an imminent threat to their life.

It’s the law that they can protect themselves.

In addition, he had this to say about the anti-gunners and their attempts to disarm the innocent and the law-abiding:

I say none are.

Craig also didn’t harm himself any by allowing the National Rifle Association to put his picture on the cover of their America’s First Freedom magazine along with an article allowing him to express his pro-freedom, pro-Second Amendment points of view. When he was challenged by local anti-gunners over the explicit NRA endorsement of his efforts to rein in crime in Detroit, Craig responded:

The majority of people on the roads drive responsibly. So if a few people drive irresponsibly, what’s the solution? Do we take away all cars?

With his experience, his support of the right to keep, bear and use arms, and a citizenry increasingly enjoying the freedom to exercise that right, criminals will more and more be forced to modify their “victim selection” process in Detroit. The city has a long way to go but it has already taken a huge first step towards sanity, thanks to the chief.

Concealed Carry confidence Crime Freedom guns invasion law National Rifle Association Second Amendment the law threat violence weapons
This entry was posted on Friday, August 1st, 2014 at 5:51 am and is filed under Constitution, Crime, Second Amendment. You can follow any responses to this entry through the RSS 2.0 feed. Both comments and pings are currently closed.
Many of the articles on Light from the Right first appeared on either The New American or the McAlvany Intelligence Advisor.