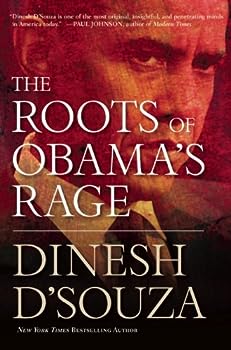 Cover of The Roots of Obama’s Rage

When Federal District Judge Richard Berman ruled that Dinesh D’Souza, co-producer of the documentary film 2016: Obama’s America, had provided no evidence that he was selectively prosecuted for arranging campaign contributions to a friend in 2012, D’Souza had no other defense. In his plea bargain with Berman on Tuesday, D’Souza pleaded guilty to one of the two counts in the indictment, saying:

I knew that causing a campaign contribution to be made in the name of another was wrong and something the law forbids.

I deeply regret my conduct.

D’Souza will likely spend between 10 and 16 months in jail. However, by having the other charge of lying to the Federal Election Commission dismissed as part of the plea bargain, D’Souza avoids spending another possible five years in jail.

D’Souza is good friends and old Dartmouth College buddies with Wendy Long, going back to their days writing for the Dartmouth Review. When Long, a highly successful litigation attorney, decided to challenge New York’s hard-left Senator Democrat Kirsten Gillibrand for her seat in 2012, D’Souza persuaded two friends and their wives to contribute $5,000 each to her campaign, promising to reimburse them afterwards. Under then-current law an individual could only give a maximum of $5,000 to her campaign. The FBI claimed that they found out about the illegal arrangement following a “routine review” of campaign filings after the 2012 election which Long lost to Gillibrand.

Following D’Souza’s indictment earlier this year, 4 Republican senators asked FBI Director James Comey to explain just how the FBI happened to focus on D’Souza in light of his highly critical movie and book The Roots of Obama’s Rage, published in 2010. In addition, the Washington Times editorialized that D’Souza was not just selectively prosecuted as an Obama enemy but was persecuted on “flimsy charges” of violating campaign finance laws. The Times said:

Whether guilty or not, the fact that Mr. D’Souza has been singled out for prosecution while others skate past freely reveals President Obama’s thumb on [Lady Justice’s] scale.

The paper went on to note that the limits of the law under which D’Souza was indicted are “limits that the U.S. Supreme Court has been finding incompatible with the First Amendment.”

The Times noted further that this is the same administration which failed to prosecute members of the New Black Panther Party for intimidating white voters with nightsticks at a Philadelphia voting place in 2008. The administration itself was fined $375,000 in 2013 for failing to disclose millions of dollars in contributions and for missing deadlines for refunding millions in excess contributions. The Times added: “No one was threatened with prison for that.”

Liberal Harvard Professor Alan Dershowitz also thought that D’Souza was singled out as an Obama enemy: “I can’t help but think that his politics have something to do with it … it smacks of selective prosecution.”

Wendy Long, who lost in her efforts to unseat Gillibrand in 2012, also claimed that D’Souza was selectively prosecuted under an unconstitutional law:

I am heartbroken about this. Dinesh has always been a generous man and a loyal friend who has helped many people. There was never a time when he was trying to do anything but help me personally, support my U.S. Senate campaign, and advance the ideals of freedom that we share. The statute that the government has used to target him is unconstitutional.

When our government criminalizes the very free speech that the First Amendment was written to protect, sends people to prison for simply exercising their constitutional rights, and when government power is wielded like weapon against political enemies, we are all in trouble.

There is no corruption here, and this entire episode is a shameful government overreach and a violation of the U.S. Constitution.

D’Souza’s co-producer Gerald Molen was even more direct in his belief that D’Souza was singled out for special attention as an enemy of the Obama administration:

This administration doesn’t see its opponents as dissenters but as enemies, and if they can’t refute you, they try to lock you up.

Normally these types of offenses as resolved with fines or community service.

Jaywalking in the [old] Soviet Union was a crime, but it’s a minor crime. The real point is that you are a political dissenter and the government wants to put you away.

For many the final straw was the revelation that D’Souza’s prosecutor, Preet Bharara, the U.S. Attorney for the Southern District of New York, was nominated for that position back in 2009 by none other than President Obama. His degrees from Harvard College and Columbia Law School merely confirmed that the prosecutor was in the bag for Obama, seeking revenge on Obama’s enemies.

A closer look, however, at Bharara’s record as prosecutor reveals a much more balanced and evenhanded approach to enforcing the law. For instance, Bharara brought Raj Rajaratnam to justice for insider trading at his Galleon Group, obtaining conviction on 14 counts and sending him to jail for 11 years and fining him more than $150 million.

Bharara went after JPMorgan Chase as Bernie Madoff’s primary banker, forcing the bank to forfeit $1.7 billion – the largest forfeiture by a bank in American history – to settle charges Bharara made that the bank failed to exercise even rudimentary oversight of Madoff’s banking activities while running his Ponzi scheme.

He also went after several of Madoff’s employees, sending several of them to jail for their participation in the fraud.

All told, Bharara has successfully brought corruption charges against nearly a dozen Democrat lawmakers since 2009. Some say this this defuses any charges that he is merely carrying water for the Obama administration in taking on D’Souza. Others hold that he’s the perfect foil for enforcing the administration’s punishment of one of its more effective critics. Unfortunately, for the moment at least, the smoking gun is missing that would prove conclusively that D’Souza was targeted deliberately.

In September D’Souza will learn his fate. In the meantime, his latest movie, America: Imagine a World Without Her is expected to be released later on this summer.

2016 Bernie Madoff Constitution Corruption Democrat FBI First Amendment Fraud Free Speech JPMorgan Chase Liberal Obama politician Ponzi Scheme Republican
This entry was posted on Wednesday, May 21st, 2014 at 9:57 am and is filed under Constitution, Crime, Politics. You can follow any responses to this entry through the RSS 2.0 feed. Both comments and pings are currently closed.
Many of the articles on Light from the Right first appeared on either The New American or the McAlvany Intelligence Advisor.