It’s unnerving and yet comforting when a worthy such as Bill Bonner agrees with me. What’s more likely is we’re both singing off the same sheet of music. In Monday’s newsletter Bonner titled his entry “The Recovery That Never Happened,” and I agree. Whatever green shoots (remember green shoots, the ever hoped-for, greatly anticipated but never sustained recovery from the Great Recession?) appeared have withered away, leaving the US, Germany and the world with an economy that isn’t recovering. In fact, it can’t, as long as the manipulators continue to administer its poisons to the patient.

Bonner is like the 500 pound canary. He founded Agora Publishing, one of the largest newsletter publishers in the world. Until recently he wrote The Daily Reckoning, a daily e-letter that goes out to 500,000 people and now blogs on his own website.

In writing about what he thinks has happened to the price of gold, he makes a couple of very interesting points: one is that commodity prices, especially that of copper, have dropped significantly – about 15% so far this year. He explains:

Copper is the metal you need to make almost anything – houses, cars, electronics. When it goes down, it generally means the world economy is getting soft.

This is confirmed by the Baltic Dry Index which continues to languish well below 1,000.  It has been as high as 12,000.

He produces a chart showing the sharp disconnect between the S%P 500 and the Deutsche Bank commodity index: 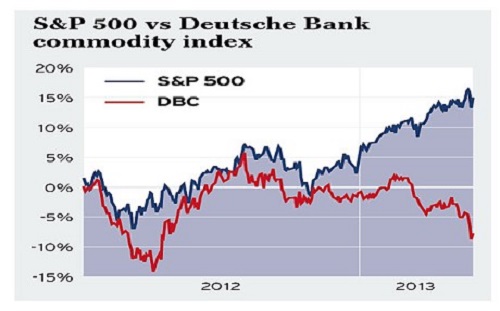 He says that in Germany sentiment indicators are coming in negative. This is in line with the work I just did in preparing my article on the phony German “model” that is being touted as the one to follow to revive a foundering economy. I looked not only at sentiment indicators, but also Germany’s demographics, its declining birth rate, its impossibly expensive welfare state, and personal income taxes. Did you know, for example, that a single worker loses half of her paycheck to taxes in Germany?

I concluded that article:

Any country wishing to adopt such a model will likely soon begin to enjoy the same results: an economic slowdown, a demographic challenge of heroic proportions, a welfare state that will shortly become unsupportable, a likely decline in its fertility rate and the resulting implosion of its population. In short, if [the German] model is adopted, it won’t take but a generation or two before Mark Steyn’s prediction comes true, that Germany and most of its neighbors will “devolve into quaint locales for vacationers, romantic poets and history buffs.”

As I said, it’s a little scary to see someone of Bonner’s stature seeing the same thing.

Economy Germany gold Great Recession Recession
This entry was posted on Wednesday, April 24th, 2013 at 6:40 am and is filed under Economics, History. You can follow any responses to this entry through the RSS 2.0 feed. Both comments and pings are currently closed.
Many of the articles on Light from the Right first appeared on either The New American or the McAlvany Intelligence Advisor.