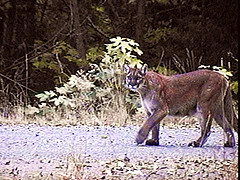 A mountain lion might eat my dog. I live less than a mile from where the attack occurred. A man was walking his dachshund when a mountain lion attacked the dog, tore his leash from the owner’s hand, and ate him.

It was small comfort to the bereaved owner that the cat was later trapped and killed. Shannon Vall who lives nearby and walks her German short-haired pointer Cana in the same area, said “We haven’t seen any [cats] ourselves” but she knows a neighbor who has, and carries a gun for protection.

Here are some more:

There are more, but these will do for a start.

Bill of Rights Concealed Carry Crime Department of Justice Gun Control Second Amendment
This entry was posted on Monday, March 25th, 2013 at 11:00 am and is filed under Constitution. You can follow any responses to this entry through the RSS 2.0 feed. Both comments and pings are currently closed.
Many of the articles on Light from the Right first appeared on either The New American or the McAlvany Intelligence Advisor.