Leave it to Mark Perry to uncover and display in graphical form just how one medical procedure, priced in the free market, has kept costs low: plastic surgery. 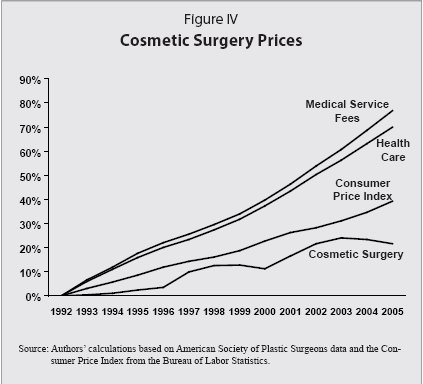 Because cosmetic surgery is rarely covered by insurance, patients typically pay 100% “out-of-pocket” for those procedures, unlike most other medical procedures. Consumers are therefore price-sensitive and may compare prices offered by different surgeons/clinics, which introduces competitive, market pressures and transparent pricing that don’t exist in most other areas of healthcare.

Look at the chart again, only this time look at the Consumer Price Index line. The cost of plastic surgery has increased less than general inflation in the market. That’s how competition works, when it’s allowed to.

And because of its relative increasing affordability, plastic surgery procedures have increased six-fold!

The increased affordability of cosmetic surgery over time, reflected in a six-fold increase in procedures between 1992 and 2005, is another example of how services provided in competitive markets by private firms get cheaper and cheaper over time, leading to increases in our standard of living.

Just imagine what overall healthcare would look like in a truly free market.

Consumer Price Index Free Market Health Care Healthcare Inflation
This entry was posted on Friday, February 1st, 2013 at 3:00 pm and is filed under Economics, History. You can follow any responses to this entry through the RSS 2.0 feed. Both comments and pings are currently closed.
Many of the articles on Light from the Right first appeared on either The New American or the McAlvany Intelligence Advisor.