A Word of Encouragement from a Friend 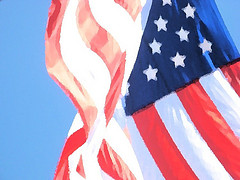 American Flag on the Fourth of July (Photo credit: mrsdkrebs)

Sterling Lacy is an ordained minister of the Gospel and has been involved in the freedom fight for more than 50 years. He wrote about discouragement in The New American yesterday and he said some things that I think needed to be said.

His opening remarks echo the thoughts of many of us:

What patriot is not disappointed with the recent election results? The prospect of four more years of the same old, same old is enough to dampen the spirit of even the brightest-eyed optimist. Any constitutionalist has to wonder just how far outside the boundaries of the written law and moral truth we can wander before something finally snaps. Historians tell us no nation has ever slid this deep into collectivism and amorality and pulled out. Prophets of doom are claiming we are already past the point of no return.

I disagree with his perception about our “wandering” outside the boundaries. I prefer, and think it’s more accurate historically to say “pushed,”, but he fairly states what most people think about our current state of affairs.

He talks about miracles: the wedding feast at Cana, His feeding of the 5,000, His raising of Lazarus. Each required human effort first – someone had to fill the jars before He could turn the water in wine, a little boy had to give up his lunch before He could work his miracle, someone (several someones) had to roll away the stone before He called Lazarus out. It’s a two-part deal: we do what we can, He does the rest. If we don’t, He doesn’t.

Lacy gives us a quote from James Garfield that I’ve never read before:

James A. Garfield as a young minister had an aversion to politics. But being a truth-seeker, he eventually saw in his Bible God’s instructions for civil government. He became convinced that a Christian’s duty was to participate in public affairs. Before becoming president in 1881, he wrote on the 100th anniversary of the signing of the Declaration of Independence the following insightful and prophetic message: “Now more than ever before, the people are responsible for the character of their Congress. If that body be ignorant, reckless, and corrupt, it is because the people tolerated ignorance, recklessness, and corruption. If it be intelligent, brave, and pure, it is because the people demand these high qualities to represent them in the national legislature. If the next centennial [1976] does not find us a great nation … it will be because those who represent the enterprise, the culture, and the morality of the nation did not aid in controlling the political forces.”

Lacy provides other encouraging words as well, along with a reminder – perhaps the most important reminder – that we are not alone in this work.

Constitutionalist Declaration of Independence Freedom The New American
This entry was posted on Thursday, January 24th, 2013 at 6:17 am and is filed under Constitution, History, Politics, Religion. You can follow any responses to this entry through the RSS 2.0 feed. Both comments and pings are currently closed.
Many of the articles on Light from the Right first appeared on either The New American or the McAlvany Intelligence Advisor.