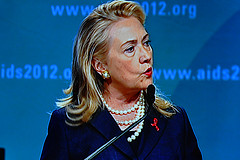 And none too soon, either. Her performance, if you could call it that, was appalling. She looked haggard, she behaved abominably, she was coarse, rude, vindictive – in other words, the old Hillary that we used to know and loathe.

Wesley Pruden, writing in the Washington Times, reminded us of those good old days:

The “old” Hillary Rodham Clinton emerged yesterday in the congressional hearings about what happened in Benghazi, and it’s the Hillary image that’s likely to last.

Pressed for the first time to answer sharp public questioning about her part in the episode, she grew angry and combative, more like the Hillary who screamed vulgarities and threw lamps at her husband at the White House than a smooth and accommodating  secretary of state.

I remember reading an expose of the Clinton years by a member of the secret service who was forced to attend to and watch over the Clintons in the White House. She was a first class witch. No wonder Willie cheated!

But with the passage of time, those images have faded.

Her performance at the hearings brings it all back to me now:  Whitewater and Vince Foster, just to name two. Accuracy in Media (AIM) reported back in 2003 about her revolutionary background including support for the Black Panthers and other radical communist groups.

Perhaps most damning, from my perspective, is her close ties to Saul Alinsky, author of “Rules for Radicals” (which the author dedicated to Lucifer). As Donald Ayotte wrote at RedState, “Hillary Rodham as a student at Wellesley in 1969, interviewed Saul Alinsky and wrote her thesis on Alinsky’s theories and methods. She concludes her thesis by writing, ‘Alinsky is regarded by many as the proponent of a dangerous socio/political philosophy…'”

Alinsky offered Hillary a job upon graduation from Wellesley but she decided to attend Yale Law School where she met her husband Bill Clinton.

As I said, her performance in the Benghazi hearings brings back memories, all of them bad. When she disappears from the national stage, she won’t be missed.

Saul Alinsky
This entry was posted on Thursday, January 24th, 2013 at 3:00 pm and is filed under Foreign Policy, History, Politics. You can follow any responses to this entry through the RSS 2.0 feed. Both comments and pings are currently closed.
Many of the articles on Light from the Right first appeared on either The New American or the McAlvany Intelligence Advisor.