Surprise! WaPo Gets it Right on Agricultural Subsidies 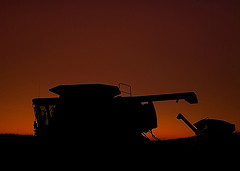 The article carefully and intelligently makes the case against agricultural subsidies, calling them just another form of corporate welfare. The 2012 drought impacted food prices far less than expected, due to intelligent drop management practices by farmers, which makes the case for continued subsidies weaker. WaPo calls them “farfetched”:

This is a tribute to the American farm sector’s productivity. As such, it is also a reminder of how far-fetched the rationale for federal agricultural subsidies — the threat of food shortages — really is. The most recent invocation of this phantom came amid the drought, when congressional boosters of the subsidy-marbled 2012 farm bill tried, without success, to exploit the dry spell.

In fact, farmers were well-protected against the drought — at significant cost to taxpayers. The vast majority of U.S. farmland is covered by crop insurance, which is heavily subsidized by the government. Washington pays 62 percent of farmers’ premiums — at a cost of  $7 billion for the 2012 crop year. It reimburses administrative costs for the 15 insurance companies that sell the policies, to the tune of $1.4 billion in 2012, and also protects the companies against financial loss.

In fact the farmers will be getting back $3.85 for each dollar they spent on insurance premiums, thanks to the US taxpayers’  funding the subsidies. WaPo calls them what they really are: corporate welfare.

In short, federally backed crop insurance has long since evolved into yet another form of  corporate welfare, whose direct costs and perverse unintended consequences outweigh its purported public benefits. The 2012 farm bill would have compounded the error by expanding crop insurance to cover almost all farmers’ losses from price fluctuations as well as natural disasters.

And what does the Editorial Board at The Washington Post propose to do about it? Get ready:

The bill’s failure affords lawmakers an opportunity to reform this increasingly wasteful program, and they should take it.

I think legislators should end them altogether, but I still think this remarkable exposure of the truth about government subsidies by a liberal mouthpiece is quite astonishing.

Insurance Liberal Subsidies
This entry was posted on Monday, January 21st, 2013 at 3:00 pm and is filed under Economics, History, Politics. You can follow any responses to this entry through the RSS 2.0 feed. Both comments and pings are currently closed.
Many of the articles on Light from the Right first appeared on either The New American or the McAlvany Intelligence Advisor.