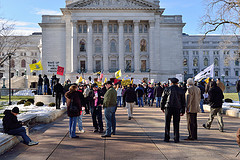 An estimated 20,000 pro-gun enthusiasts braved cold weather and a national media blackout on Saturday to support their rights to own guns, according to the Daily Mail, a British tabloid. This was a grass-roots movement, called Guns Across America, that began, according to the tabloid, when Eric Reed, an airline captain in Houston, decided that a response to the threats to the Second Amendment coming from the Obama administration was demanded. He started a group on Facebook called “More Gun Control = More Crime,” which as of this writing has more than 19,000 “likes.” Most of them kept their promise to show up at state capitols on Saturday.

What Reed wanted to do was to send “a very, very strong message to Congress and to our president that we the people are against any more gun control.” He added,

I realized that I’m part of the problem. It takes somebody to stand up and say, ‘Hey, we’re not going to accept this. We’re against it.’

We want Americans who feel the same way to come out. We want to stand up, be united and get our point across.

To have thousands of them show up at state capitols on Saturday far exceeded his initial expectations. Said Reed,

What’s uplifting and encouraging is the amount of support we’re getting from Americans who are against any more gun control and who are trying to help save our Second Amendment.

There’s definitely a lot more out there than I imagined when I started this.

Several thousand showed up in Denver, Colorado, gathering at “high noon” on Saturday to protest the Obama administration’s threats to limit citizens’ rights under the Second Amendment. 1,000 showed up in Hartford, Connecticut while an estimated 2,000 supporters protested in Albany, New York. 500 arrived at noon in Nashville, Tennessee, while another 500 rallied in St. Paul, Minnesota. In all there were rallies in 49 states, with many citizens carrying signs.

Some of them were direct and to the point:

Other signs were more provocative:

And some were thoughtful:

Local media covered the events without getting national attention. Some revealed supporters who had a poor understanding of just what the Second Amendment was all about. For example, Don Dobyns, a military veteran and ex-police officer from Pueblo, Colorado, said, “All I want is my Second American rights. I’ve earned them. Nobody that hasn’t even served has a right to take them away from us.”

All that the Second Amendment does, however, is guarantee the right to own a gun. The right to ownership comes from God who gave Dobyns his life and along with it his right to defend it. It isn’t something that can be earned, nor does anyone who has served in the military, or anywhere else for that matter, “have the right to take them away,” as he suggests. A government grown too large, outside of its Constitutional limitations, may someday be able, by force, to take them away, but the right remains.

In warfare, one cannot fight something with nothing. Put another way, a purely defensive position is destined to lose. This explains the popularity of the “nullification” movement which, according to Alex Newman, writing for The New American magazine, is spreading nationwide as well. Newman wrote,

Across America, state lawmakers, governors, attorneys general, sheriffs and other officials are promising to protect the gun rights in their jurisdictions…

Numerous bills have already been introduced in state legislatures … that would nullify unconstitutional federal gun control and even criminalize enforcement of such lawless restrictions.

Sheriff Denny Peyman from Jackson County, Kentucky, is one example of one who understands his role as ultimate protector of his citizens. In an interview with Newman, Peyman said,

This reflects an increasing understanding of sheriffs’ responsibilities to protect their citizens, aided and abetted by Sheriff Mack who helped establish the Constitutional Sheriffs and Police Officers Association (CSPOA).That organization is dedicated to informing, educating and inspiring county sheriffs about their constitutional responsibilities as the citizens’ primary line of defense against unconstitutional federal intrusions.

But even that is still a defensive posture, and one cannot win a game on the strength of the defense alone. What is needed is an offense.

Alan Scholl, the Executive Director of the Freedom Project Education (FPE), an educational organization in Appleton, Wisconsin, received a note via social media about the Guns Across America rally to be held in nearby Madison. When he arrived with some supporters he was surprised and delighted to see 800 others gathered together to support the Second Amendment. Fortuitously, Scholl has asked at the last minute to address the crowd about the positive program of education that FPE is offering: an understanding of exactly what the Constitution is, where it came from, how it’s being undermined, and how to restore it. He explained that “young people come into this world not knowing anything. With FPE those young people are taught the traditional values of Americanism and limited government along with an appreciation of the Bill of Rights. That’s where the battle is raging, and that’s where we can win!”

Following his presentation Scholl and his supporters were overwhelmed with requests for more information. He laughed, “They were chasing us down in the parking lot. We ran out of material. Folks kept peppering us with questions, wanting to know more. They understood: education is the key. Action comes afterwards.”

Indeed, FPE is part of the educational effort launched by The John Birch Society more than 50 years go which, according to its website,

is a non-partisan educational and action organization. The John Birch Society is organized at the grassroots level with paid coordinators and volunteer leaders who establish chapters in communities all across the country.

Through social media such as Facebook, Eric Reed was able to galvanize thousands to support the Second Amendment and protest threatened federal restrictions against it. The only lasting effect of such rallies, however, will be in the hands of those chasing people like Alan Scholl out to the parking lot in Madison, demanding to know more about educational programs like FPE. They are the answer, designed to inform, educate and then activate people in a positive program to restore the Constitution and its precious Bill of Rights, including the Second Amendment.

Constitutional Crime Education Freedom Gun Control John Birch Society Military Obama Second Amendment The New American
This entry was posted on Monday, January 21st, 2013 at 7:00 pm and is filed under Constitution, History, Politics, Religion. You can follow any responses to this entry through the RSS 2.0 feed. Both comments and pings are currently closed.
Many of the articles on Light from the Right first appeared on either The New American or the McAlvany Intelligence Advisor.