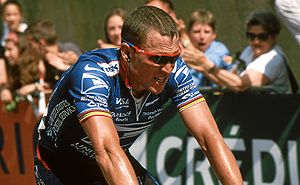 I was thinking about the choices and decisions Lance Armstrong made in his life. And I was reminded of what Steven Covey said: “While we are free to choose our actions, we are not free to choose the consequences of our actions.”

Lance made some decisions. Tyler Hamilton explained how they happened in his book, The Secret Race, which I just finished reading. In Tyler’s case it was insidious. It was one small decision that was made without thinking about consequences. He was so focused on winning that anything that would help was OK. Since everyone else was doing it, he never gave it another thought. It was just a little thing, a small decision, now “let’s ride!”

Michael Brown had some thoughts on Lance’s decisions:

1) Even if “everyone is doing it,” that doesn’t make it right.

If Lance had declined, had not taken that first step, we probably would never have heard of him. He would have become part of the peloton, invisible, undistinguished, unknown. He would have retained his character, his integrity.

But he made the decision to dope, and no amount of “explaining” can overcome that fact.

I was a great fan of Lance, as many were. I bought and read his books, I watched his videos, I watched the Tour and cheered him on. I also knew that he was doping. He had to be. There was just too much circumstantial evidence to deny it. When the truth finally came out, I took all my Armstrong books and videos down to Goodwill.

2) It’s always better to confess volitionally than to confess because you have no choice.

Brown quotes some Scripture from the Old Testament: Proverbs 28:13: “He who covers up his sins will not succeed; He who confesses and gives them up will find mercy.”

But Lance is finding precious little mercy, partly because he was so insistent for so long that he was clean, and for bullying those who knew the truth and tried to tell people about it.

4) The public can forgive you, but it takes a long time to rebuild trust.

I think it’s going to take a very long time. And that’s what I wanted to say about Lance. He will suffer from these bad decisions for a very long time. His life will get much worse. He may even become poor as the “clawback” takes place, removing from him not only the honors he received but the financial support as well. He will find that his life will be very hard. People will remember him not for what he did but for what he is. He will be a pariah, an outcast, unwelcome. He will, for many including me, be a reminder of how our choices and their consequences impact our lives.

Lance will be a reminder also of how there, but for the grace of God, go I.

This entry was posted on Monday, January 21st, 2013 at 11:00 am and is filed under History. You can follow any responses to this entry through the RSS 2.0 feed. Both comments and pings are currently closed.
Many of the articles on Light from the Right first appeared on either The New American or the McAlvany Intelligence Advisor.