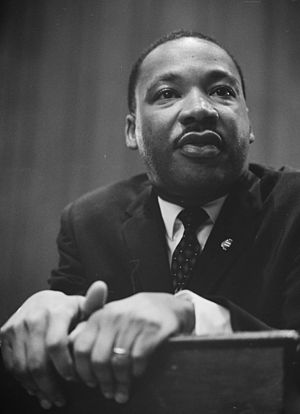 I do not honor Martin Luther King Day by taking the day off, and I do not honor MLK. For more information about why I don’t, you can click here to learn about his background. Warning: if you decide to check it out, you won’t like what you find. Forewarned is forearmed.

With that disclaimer out of the way, I was reading King’s letter and thought something he said was relevant to some decisions many of us are making now, or may be forced to make soon, about just how far we’re willing to go to comply with gun control regulations before becoming an outlaw. He was responding to some clergymen who were critical of his “work” in Birmingham:

You express a great deal of anxiety over our willingness to break laws. This is certainly a legitimate concern. Since we so diligently urge people to obey the Supreme Court’s decision of 1954 outlawing segregation in the public schools, at first glance it may seem rather paradoxical for us consciously to break laws. One may well ask: “How can you advocate breaking some laws and obeying others?” The answer lies in the fact that there are two types of laws: just and unjust. I would be the first to advocate obeying just laws. One has not only a legal but a moral responsibility to obey just laws. Conversely, one has a moral responsibility to disobey unjust laws. I would agree with St. Augustine that “an unjust law is no law at all.”

Where does the Second Amendment come from? It is a reflection of God’s law that life is a gift from Him, and was expressed perfectly by Thomas Jefferson: “We hold these truths to be self-evident, that all Men are created equal, that they are endowed by their Creator with certain unalienable Rights, that among these are Life, Liberty, and the Pursuit of Happiness…” If God gave us life, it follows that he intends for us to protect that right, to defend that right. When a law is passed that removes, or threatens to remove, our ability to defend our right, then that law, in my opinion, becomes unjust.

To be more specific, if a law is passed that requires me to give up weapons that I might use to defend myself, then by definition that law becomes unjust and one that I will ignore.

Frankly, I don’t think we’ve come to that point – far from it – but some of us are looking at potentials, in advance, doing some “prepping” if you will, about how to respond in case of certain eventualities occurring. One of them is confiscation. It’s a decision some of us are already making, hoping against hope that we never are pushed so far as to have to become outlaws in order to defend life.

Gun Control Regulations Second Amendment
This entry was posted on Monday, January 21st, 2013 at 6:46 am and is filed under Constitution, History. You can follow any responses to this entry through the RSS 2.0 feed. Both comments and pings are currently closed.
Many of the articles on Light from the Right first appeared on either The New American or the McAlvany Intelligence Advisor.