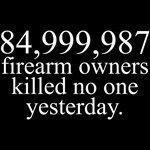 It takes awhile, but eventually reality sets in. Biden’s attempt to enact new restrictions on gun ownership will die ‘aborning. It took Reuters (a liberal paper in Great Britain) to see that reality.  From Reuters,

Even some congressional Democrats indicated that a bill to revive the U.S. assault weapons ban that expired in 2004 would have a difficult time winning passage in the Republican-controlled House of Representatives and Democratic-led Senate.

Liberal Democrat Senator Joe Manchin from West Virginia, who sports a dismal Freedom Index rating of just 35 out of 100, won’t be voting for it: “An assault weapons stand-alone ban – on just guns alone … in the political reality that we have today, will not go anywhere.” What’s interesting is that, when it comes to guns and the Second Amendment, Manchin is taking the NRA’s position, most likely for political survival purposes. He also happens to be a gun owner.

Reuters quotes NRA President David Keene who issued what I consider to be a wishy-washy position on new controls:

What we put the brakes on is anything that simply takes away a person’s Second Amendment right for no good reason. The likelihood is that they are not going to be able to get an assault weapons ban through this Congress. We’re not willing to compromise on people’s rights when there is no evidence that doing so is going to accomplish the purpose.

Larry Pratt, head of Gun Owners of America, agrees (this time, at least) with the NRA:

Reuters found Democratic resistance elsewhere as well. House member Elijah Cummings (D-Md.), with an anti-Constitutionalist Freedom Index rating of 21 (he is a member of the Congressional Progressive Caucus which doesn’t excuse such a poor rating but at least explains it), admits the chances of anything happening in pretty slim: “”I think that we have a possibility. But I think it’s going to be very difficult…”

The harder they push, the harder it will be to pass any new gun control laws. That’s the current reality in Washington.

Constitutional Constitutionalist Democrat Freedom Gun Control House of Representatives Liberal NRA Republican Second Amendment
This entry was posted on Monday, January 14th, 2013 at 11:00 am and is filed under Constitution, History, Politics. You can follow any responses to this entry through the RSS 2.0 feed. Both comments and pings are currently closed.
Many of the articles on Light from the Right first appeared on either The New American or the McAlvany Intelligence Advisor.