Head Start Doesn’t Give the Kids a Head Start 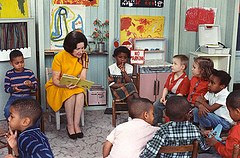 Here’s how the cancer of government grows. Head Start began in 1965 as a summer program. It didn’t work. An apologist who edited content at Wikipedia said “Experience showed that six weeks of pre-school couldn’t make up for five years of poverty.” And so the program, which failed, was – you guessed it – expanded in 1981. It grew further in 2007. It is, according to Wiki, “one of the longest-running programs to address systemic poverty in the United States.” More than 22 million kids have “participated.”

The Department of Health and Human Services finally decided to see if there were any positive results after spending $180 billion: they finished collecting the data in 2008 but the results were so catastrophically dismal that the HHS put off releasing it until last December.

By third grade, the $8 billion Head Start program had little to no impact on cognitive, social-emotional, health, or parenting practices of participants. On a few measures, access to Head Start had harmful effects on children. (my emphasis)

The Heritage Foundation asked a couple of its resident scholars to look into the matter.  They noted several things: not only was the report four years late in getting published, it was also published in October 2012 but not released until after the election, in December. No political motive was mentioned by the scholars.

But the report echoes the failure of the program that was reported back in 2010 following the tracking of some 5,000 kids entering Head Start in kindergarten and the first grade. At that time, Head Start could show “no positive effects” on the kids. And this is from the outfit that runs the program. You’d think they could come up with something positive to say about it, wouldn’t you?

Here’s what the scholars wrote:

For the four-year-old group, compared to similarly situated children not allowed access to Head Start, access to the program failed to raise the cognitive abilities of participants on 41 measures. Specifically, the language skills, literacy, math skills, and school performance of the participating children failed to improve.

For some, participation in Head Start was a detriment:

Alarmingly, access to Head Start for the three-year-old group actually had a harmful effect on the teacher-assessed math ability of these children once they entered kindergarten. Teachers reported that non-participating children were more prepared in math skills than those children who participated in Head Start.

It’s bad enough when a government program fails to produce. When it actually retards progress, it becomes obscene.

HHS has released definitive evidence that the federal government’s 48-year experiment with Head Start has failed children and left taxpayers a tab of more than $180 billion. In the interest of children and taxpayers, it’s time for this nearly half-century experiment to come to an end.

Not a chance. Buried in the Sandy Hurricane bailout bill is support for – you guessed it – Head Start. It’s scheduled to put another $100 million into the hands of the bureaucrats at HHS to extend its failures with Head Start.

Federal Government Heritage Foundation HHS Spending
This entry was posted on Monday, January 14th, 2013 at 3:00 pm and is filed under History, Politics. You can follow any responses to this entry through the RSS 2.0 feed. Both comments and pings are currently closed.
Many of the articles on Light from the Right first appeared on either The New American or the McAlvany Intelligence Advisor.