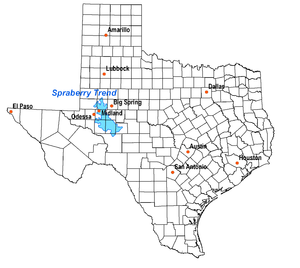 Location of the Spraberry Trend in Texas, with major and nearby cities. All data on this map is in the public domain; created by me in ArcGIS 9.3. (Photo credit: Wikipedia)

Get ready for what’s happening in West Texas, where oil and gas production is  ramping up in shale layers such as the Wolfcamp in and around Midland.

Remember that name: Wolfcamp. For the record, it’s also called the Spraberry Trend, but Wolfcamp is the name that’s catching on. Ken Morgan, director of the Texas Christian University Energy Institute, said, “We’re getting thousands and thousands of feet of pay zone [there]. It’s like the Eagle Ford on steroids. [We] haven’t even begun. We’re just in the toe of this thing.”

Just how big is Wolfcamp? At the moment it’s so large that no one can tell for sure. Marathon Oil Corporation‘s John Breyer, a geologist who is an expert on these things, doesn’t know: “We’re so early in this. I don’t think anybody really knows.”

I checked Wikipedia, which is usually pretty current on such things, but not this time. The latest data they have goes back to 2007 when Wolfcamp was estimated to hold 10 billion barrels. But in the fracking business, five years is one full generation. Today there could be 100 billion barrels there. In any event, according to Breyer, “It’s going to dwarf North Dakota.”

Morgan said these discoveries are “upending” the world energy market. Natural gas prices were $12 per million BTUs, and are now $3.33. This is far below prices for natural gas in Europe and Japan and so there will be huge investments in liquefaction plants to turn the gas into LNG which can then be shipped abroad. This will bring the world’s cost of natural gas down, and impact the oil markets. Morgan says that OPEC is already getting “jittery” about what’s happening in Texas and North Dakota. Translation: oil prices will be coming down, in order to compete.

Christian Energy EPA Fracking Free Market Gas Prices North Dakota Oil Prices OPEC
This entry was posted on Saturday, January 12th, 2013 at 11:00 am and is filed under Economics. You can follow any responses to this entry through the RSS 2.0 feed. Both comments and pings are currently closed.
Many of the articles on Light from the Right first appeared on either The New American or the McAlvany Intelligence Advisor.