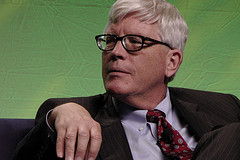 And that was exacerbated by the internet, with which the GOP is unfamiliar:

This is not an era of stunts, but because of new media, a time for serious argument instead. The GOP has not yet recognized the old era of secret deal-making is over and a new era of public argument begun. It is not very good at the latter, being about a light year behind when it comes to the mechanics of being heard in the new millennium.

So, in order to preserve anything resembling the Republican party – to keep Obama from moving it from obscurity to oblivion – the GOP had to go along:

The GOP couldn’t beat him, so it must join him in his tactical approach to issues.

What’s the answer?  Hewitt thinks the GOP has to ramp up, somehow, its concerns about spending. And it must put forth “sensible” and “reasonable” solutions. The only problem is that Republicans like spending other people’s money. It’s only the other guys’ spending they don’t like. It’s not the spending, Mr. Hewitt, it’s what the money we don’t have is being spent on.

Hewitt thinks the entitlement programs can be reformed and made “sustainable”:

And don’t you dare touch military spending, either:

The case for protecting the Department of Defense must be made.

The problem is not the Department of Defense budget. We have cut, and more savings can be achieved. But our security and our prosperity depends upon our military strength and we must continue to spend close to 4% of our nation’s wealth on protecting the nation.

Hewitt’s in the tank for the respectable Republicans and their agenda. Nothing of any value here, just move along.

Department of Defense Fiscal Cliff Medicaid Medicare Military Obama Republican Retirement Spending
This entry was posted on Thursday, January 3rd, 2013 at 11:00 am and is filed under Economics, History, Politics. You can follow any responses to this entry through the RSS 2.0 feed. Both comments and pings are currently closed.
Many of the articles on Light from the Right first appeared on either The New American or the McAlvany Intelligence Advisor.