Where Are the Spending Cuts? 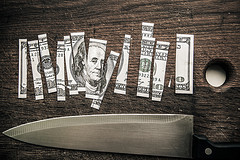 The fiscal cliff “deal” about to be signed into law by President Obama is all about tax increases. This is what The One has wanted since he got into office. He wanted to overload the system so much that taxpayers would be forced to pay more. It’s more of the “leveling” required to push the US down relative to other deadbeat nations who also can’t pay their bills. The easier to be “absorbed” into the new world order run by non-elected elites. But I digress…

According to the Congressional Budget Office (CBO), the “deal” consists of $15 billion in spending cuts (over the next ten years, mind you) compared to $620 billion in new taxes – a ratio of 41:1. What a deal!

“We’ll address spending cuts later” is now the cry from sycophants like Grover Norquist. “We got a deal we can live with,” they say. “Now let’s get down to business.”

Sorry. Business is already done. That window of opportunity to hold the government accountable is closed. Obama got what he wanted. Boehner caved in. End of discussion.

I’m biased (!). But I think the fiscal cliff turned out to be a speed bump on the road to more government spending. The stock market is up nicely today in celebration – a “relief” rally it will be called, relief that all this shouting and wringing of hands is over and we can get back to business as usual.

Of course there remain little things like the continued deficit spending adding a trillion a year – a year – to the national debt. In a few years (2020 is only 8 years from today) it will be over $25 trillion, and accelerating. And there’s the debt ceiling discussion that Congress will agonize over (before raising it again) that will start in about three weeks.

But at least something was done.

Americans for Tax Reform CBO Debt Ceiling Deficit Elite Fiscal Cliff Grover Norquist National Debt New World Order Obama Spending Stock Market Taxes Taxmageddon Taxpayer Protection Pledge
This entry was posted on Wednesday, January 2nd, 2013 at 11:00 am and is filed under Economics, Politics. You can follow any responses to this entry through the RSS 2.0 feed. Both comments and pings are currently closed.
Many of the articles on Light from the Right first appeared on either The New American or the McAlvany Intelligence Advisor.