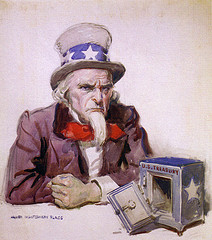 Now that the House of Representatives has virtually rubber-stamped the Senate bill to avoid going over the fiscal cliff – the so-called American Taxpayer Relief Act of 2012 (ATRA) – which President Obama is expected to sign shortly, commentators have been working feverishly to determine exactly what is in the 157-page bill that no one had time to read before being rushed to completion at the very last minute.

The analysis by the Congressional Budget Office (CBO) measured the impact of ATRA against its baseline assumption that the congress would do nothing and let all the pieces and parts of the fiscal cliff occur automatically. In that baseline, annual government deficits would have been cut in half, from $1.1 trillion to about $640 trillion. But under the new law, the national debt will increase by $4 trillion over the CBO’s baseline.

When David Lawder, writing for Yahoo! News, looked at the CBO’s analysis, he concluded:

By going over the fiscal cliff, the CBO had previously forecast that the higher taxes and lower spending would slash the fiscal 2013 U.S. budget deficit by more than half, to $641 billion from $1.1 trillion the prior year.

But in its analysis of the Senate-passed plan, the CBO said fiscal 2013 revenues would be $280 billion lower and spending $50 billion higher, resulting in a $330 billion deficit increase, for a total deficit of around $971 billion.

In other words, all the noise that has kept the fiscal cliff topic front and center at every media outlet over the last month has come to this: the deficit will be reduced from $1.1 trillion to $1 trillion. And such estimated slight improvement is going to be very costly to nearly every taxpayer in the country.

While tax brackets for those making less than $450,000 will remain the same, taxes on capital gains and dividends will increase on precisely those who create jobs, thus assuring little help for the 12 million Americans still not fully employed, thanks to the Great Recession. It also does nothing to stop the increase in payroll taxes by 2 full percentage points effective January 1st, so millions will see their paychecks shrink next week.

And it increases government spending as it continues unemployment insurance, agricultural subsidies, and puts off the 27% reduction to Medicare providers – totaling an estimated $330 billion over the next ten years.

As writers at the Wall Street Journal noted yesterday, ATRA is “the biggest tax increase in 20 years in return for spending increases (emphasis in the original), and all spun for political purposes as a “tax cut for the middle class.”

But the fiscal cliff was a “manufactured crisis,” according to the Journal:

Even those making less than $300,000 a year are in for a surprise as well: their favorite deductions and exemptions will be phased out under the terms of the law so they effectively will be paying more in taxes even though their tax bracket remains the same, just proving that there’s more than one way to skin a cat.

Small business owners will be hit the hardest. The attack on the capitalist system by the act will be felt directly, immediately and most painfully on those providing the capital to keep the system functioning. How much incentive will be left after a small business owner, battling for years to build a profitable business by providing products and services that are needed and useful to his customer, discovers, after talking with his accountant in April that the government now wants to take half of his profits? The Journal explains:

As for small business, the overall tax increase this year is substantial. The new listed top rate of 39.6% doesn’t include the phase-out of deductions that will take the actual rate to 41% or so for many taxpayers.

Add the ObamaCare surtaxes on investment income (3.8%) and Medicare (0.9%), as well as the current Medicare tax of 1.45% (employee share), and the real top marginal tax rate on a dollar of investment income from a bank savings or money-market account will be about 46%. Throw in state taxes, and the marginal rates in many places will be in the mid-50%-or-higher-range.

Perhaps the most costly part of ATRA is the missed opportunity the congress had to do something substantial about the deficit. As noted by the Committee for a Responsible Federal Budget, the passage of ATRA “represents an incredible failed opportunity by missing what Erskine Bowles calls a ‘magic moment’ to put in place a comprehensive plan that would simultaneously avoid the fiscal cliff and, more importantly, enact the spending cuts, tax reforms and entitlements reforms necessary to truly control rising [government] debt.”

What hasn’t been learned in Washington is that attempted “grand bargains” – laws cobbled together at midnight offering spending cuts in the future for tax increases now – never work. And promises made by politicians cannot be trusted. When George H. W. Bush was running for president against Michael Dukakis in the fall of 1988, Bush said:

I’m the one who will not raise taxes. My opponent now says he’ll raise them as a last resort, or a third resort. But when a politician talks like that, you know that’s one resort he’ll be checking into. My opponent won’t rule out raising taxes. But I will. And the Congress will push me to raise taxes and I’ll say no. And they’ll push, and I’ll say no, and   they’ll push again, and I’ll say, to them: Read my lips: no new taxes!

It is clear to me that both the size of the deficit problem and the need for a package that can be enacted require all of the following: entitlement and mandatory program reform, tax revenue increases, growth incentives, discretionary spending reductions in defense expenditures, and budget process reform.

The very next day the New York Post ran this headline: “Read my Lips: I Lied.” The senior Bush lost reelection on that failure to keep his promise. The deal that Bush cut with Democrats promised $2 in spending cuts for every $1 in tax increases. As Americans for Tax Reform (ATR) noted:

Every penny of the tax increases ($137 billion from 1991-1995) went through. Not only did the Democrats break their promise to cut spending below the CBO baseline by $274 billion—they actually spent $23 billion above CBO’s pre-budget deal spending baseline.

Ronald Reagan had to learn the same lesson the hard way. In negotiating what became the 1982 Tax Equity and Fiscal Responsibility Act (TEFRA), he agreed to sign the bill on the promise, again by Democrats, that there would be $3 of spending cuts for every $1 dollar in tax increases. Instead, as ATR explained:

The spending restraint never materialized. Instead, the resulting tax hike…amounted to the largest peacetime tax increase in American history.

Until now. With zero spending cuts, and increased government spending of more than $300 billion built into ATRA, the increased tax revenues will just disappear into the maw of a government whose spending is out of control.

Is there anything in ATRA that bodes well for the future? The Wall Street Journal thinks so:

If there is a silver lining to this fiasco, it is that this may be the high-water mark of Mr. Obama’s redistributionist tax agenda. The President has had unusual leverage over Republicans because he just won re-election and because taxes were going to go up even if they did nothing. The GOP wanted to avoid the blame for not sparing the middle class from the higher rates.

But we hope the GOP has learned, after two failed attempts, that Mr. Obama is not someone with whom it can do a “grand bargain.”

They may be optimistic. What is certain is that the president has gotten his way: higher taxes and more government spending with the help of Republicans only too willing to go along to get along.

Americans for Tax Reform CBO Deficit Entitlements Fiscal Cliff Heritage Foundation House of Representatives Medicare National Debt Obama Obamacare Senate Small Business Social Security Spending Taxes Unemployment Wall Street
This entry was posted on Wednesday, January 2nd, 2013 at 7:00 pm and is filed under Economics, Politics. You can follow any responses to this entry through the RSS 2.0 feed. Both comments and pings are currently closed.
Many of the articles on Light from the Right first appeared on either The New American or the McAlvany Intelligence Advisor.