What if we go over the fiscal cliff? Get ready for a surprise.

Robert Murphy calls himself an anarcho-capitalist which is shorthand for a free market supporter in all things. He is preparing a long article on the impact on government finances if the fiscal cliff is allowed to happen. He gives us a sneak preview of what he has discovered.

He started out using the numbers from the Congressional Budget Office (CBO). That’s as good a place to start despite it being a government agency using government numbers. It doesn’t seem to have a hidden agenda. It just uses the best numbers it can find, and is considered by both sides of the aisle to be fairly accurate. Here’s this from his sneak preview: 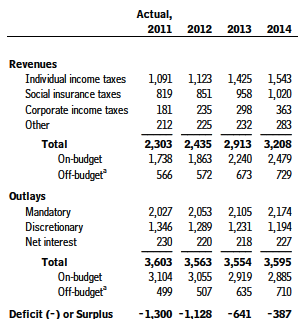 Parsing the numbers tells you all you need to know: revenues to the government go up by nearly $500 billion, while government spending is cut – ready? – by $9 billion.

But the deficit is cut nearly in half. As Murphy writes:

In summary, if we go over the “cliff,” the government plans on sharply reducing the budget deficit compared to its 2012 level. Of this $487 billion reduction in the federal budget deficit, the savings will come through two mechanisms:

Deficit Fiscal Cliff Free Market Spending Taxmageddon
This entry was posted on Thursday, December 27th, 2012 at 6:30 am and is filed under Economics, Politics. You can follow any responses to this entry through the RSS 2.0 feed. Both comments and pings are currently closed.
Many of the articles on Light from the Right first appeared on either The New American or the McAlvany Intelligence Advisor.