Boehner Burns Down His Own House 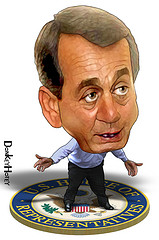 This has received a lot of attention, and well it should: Speaker of the House John Boehner has fired some conservatives because they didn’t want to play ball – Republican ball, that is:

Rep. Ron Paul [FI 100] couldn’t believe Boehner would do something so stupid:

It will also serve to clear up any confusion about which side of the fence Boehner is on.

Mark Horne, the writer of the article at Last Resistance, doesn’t understand Boehner. He thinks he’s made a huge mistake:

What I don’t understand is how Boehner and his fellows cannot understand that they are burning down their own house.

Whether candidates are sincere or lying, the voters want to believe they are choosing a candidate who has principles other than simply staying in office for personal gain. To publicly advertise that anyone who believes in a balanced budget and an unencumbered economy is simply going to be excluded from “the club” is to invite being kicked out of office.

Boehner has got to realize that he can’t just pretend to care about the looming debt crisis and continue to not do anything about it.

The word hypocrite comes to mind here, but it’s worse than that. Boehner has been an establishment Republican for years. Just take a quick look at his entry at Wikipedia: he’s been in Congress since 1991 and “is second in line to the Presidency following the Vice President.” He knows how to play the game. He is not only a member of the GOP (Grand Old Party) but also the GOB (Good Old Boys) club.

Horne has high hopes for Boehner:

Balanced Budget Conservative Economy Establishment Freedom John Boehner Republican Ron Paul
This entry was posted on Tuesday, December 11th, 2012 at 11:00 am and is filed under Constitution, Politics. You can follow any responses to this entry through the RSS 2.0 feed. Both comments and pings are currently closed.
Many of the articles on Light from the Right first appeared on either The New American or the McAlvany Intelligence Advisor.