Union Protesters to Descend on Lansing Over Right to Work 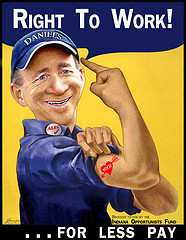 Painting the issue in the darkest possible terms, labor organizer Dan Fingas said on his Facebook page that

Michigan’s far-right legislature slipped through Right to Work legislation without any debate. Without any input. And Michigan workers are under attack. It’s time to step up.

There will be a Rally at the Capitol on Tuesday, December 11th, at 8:00AM.

By the middle of the day on Monday, fewer than 1,200 people said they were going to attend, but the Michigan State Police aren’t taking any chances and are preparing for an overflow crowd at the Capitol Building which has a capacity of 2,000.

At issue is the nearly certain ratification of right-to-work legislation that both houses have already approved to make Michigan the 24th Right to Work (RTW) state in the nation. The final vote is scheduled for Tuesday.

Governor Rick Snyder has already indicated that he’ll sign the legislation, stating that “this is all about taking care of the hard-working workers in Michigan, being pro-worker and giving them freedom to make choices.”

It’s also all about ultimately improving living standards not only for the newly freed workers but for the state itself. Charlie Owens, Michigan’s director for the National Federation of Independent Business, said:

It would be the most important economic reform in decades and it would make Michigan immediately more competitive regionally, nationally and internationally. Small business owners have waited years for this reform.

Economics professors and supporters of collective-bargaining (CB), or forced-unionism, disagree. Dale Belman, a labor relations professor at Michigan State University says instead that “there is a lot of evidence that wages and benefits are lower in right-to-work states,” while pro-union Detroit Free Press writer John Gallagher noted:

The National Institute for Labor Relations Research (NILRR) thinks wages only tell part of the story. Instead, it’s how far those wages go in supporting a standard of living. When costs of housing, food, utilities, transportation, health care and other goods and services are taken into account, an opposite conclusion is reached: RTW states have higher standards of living than do CB states.

Using data from the highly regarded non-partisan Missouri Economic Research and Information Center (MERIC), it’s easy to compare costs of living in RTW and CB states, and NILRR concludes that

Among the 16 states with the highest overall cost of living last year, not one has a Right-to-Work law on the books.

On the other hand, among the 15 states with the lowest overall cost of living, 11 had Right-to-Work laws…

On average, the cost of living in states where forced union dues are permitted was nearly 20% higher than in Right-to-Work states.

The fact that freedom of association is a natural right guaranteed by the First Amendment isn’t lost on the National Right to Work Legal Defense Foundation, which explains:

The Right to Work principle–the guiding concept of the National Right to Work Legal Defense Foundation–affirms the right of every American to work for a living without being compelled to belong to a union.

Compulsory unionism in any form–“union,” “closed,” or “agency” shop–is a contradiction of the Right to Work principle and the fundamental human right that the principle represents.

Whether the Michigan State Police have their hands full on Tuesday or will instead have little or nothing to do is largely irrelevant: Michigan’s union labor force has declined so much over the past two decades that Charles Ballard, a pro-union professor at Michigan State, admitted: “In [that] sense the advocates of right-to-work have already won.”

Protestors at the Capitol building in Michigan on Tuesday may be fighting a battle that has already been lost.

BLS First Amendment Freedom Health Care Mitch Daniels Republican Small Business The New American Unions
This entry was posted on Monday, December 10th, 2012 at 7:00 pm and is filed under Constitution, Economics, Politics. You can follow any responses to this entry through the RSS 2.0 feed. Both comments and pings are currently closed.
Many of the articles on Light from the Right first appeared on either The New American or the McAlvany Intelligence Advisor.