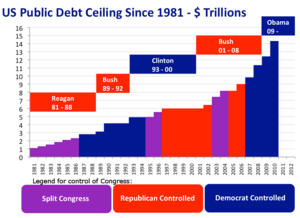 Chart of the United States’ debt ceiling from 1981 to 2010 in $ trillion. This chart tracks the debt ceiling at the end of each calendar year. Years are color coded by congressional control and presidential terms highlighted. (Photo credit: Wikipedia)

Once in a while I run across someone with such uncanny ability with words to describe the essence of an issue that it takes my breath away. Star Parker did just that:

Why do we have to keep raising the debt ceiling? Because politicians are afraid to be honest with the American people and immediately raise taxes to pay for all their new spending. So instead of raising taxes and paying for our new bills when we incur them, they just borrow the money.

They do it without our permission, and then expect us – force us – to pay those bills when they come due. Says Parker:

They could be honest. When they have their wonderful ideas about what they want to spend our money on, they could go right to taxpayers and say we are going to spend X for Y so we will raise your taxes Z to pay for it. OK?

They discovered years ago that they couldn’t do this. That’s why they had to create the money machine – the Fed – in order to spend money they don’t have and can’t raise in taxes – and then present the bill to us later:

Politicians know that the money they are spending ultimately will come out of every American household. And if they go to those households, to those actually responsible to pay the bills, and the heads of those households know they don’t have the money, they will say “NO! Don’t spend the money and don’t raise my taxes!”

Debt Ceiling Federal Reserve Spending TARP Taxes
This entry was posted on Monday, December 10th, 2012 at 3:00 pm and is filed under Economics, Politics. You can follow any responses to this entry through the RSS 2.0 feed. Both comments and pings are currently closed.
Many of the articles on Light from the Right first appeared on either The New American or the McAlvany Intelligence Advisor.