Who is Grover Norquist, Really? 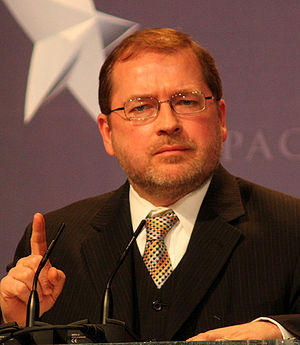 It was brought to my attention yesterday that I’ve been perhaps too generous in my praise of Grover Norquist. the founder of Americans for Tax Reform (ATR) and the man responsible for getting huge numbers of Representatives and Senators to sign his Taxpayer Protection Pledge. Indeed I, like many others, have enjoying quoting his most favorite saying: “I’m not in favor of abolishing the government. I just want to shrink it down to the size where we can drown it in the bathtub.”

I also like what ATR stands for: it “opposes all tax increases as a matter of principle.” So if so many credible people over such a long period of time think Norquist is OK, then who am I to argue?

Except that I’ve discovered there’s more to the man than just what is published at Wikipedia, although that’s a good place to start. Wiki states that he is a member of the Council on Foreign Relations (CFR) about which I know more than the average bear, having read several exposes of it and have watched its influence expand over the past 40 years. I agree with those who consider the CFR the center of the Anglo-American establishment that Carroll Quigley has written about, as well as James Perloff.

Wiki also notes that Norquist founded something called the Islamic Free Market Institute where Wiki provides us with this chilling bit of information:

Both organizations were alleged to be part of the so-called SAAR Network of interrelated business and non-profit entities with ties to sources of terrorism financing, and were among the subjects of a March 20, 2002 raid conducted by the U.S. Custom Service under the auspices of Operation Green Quest.

The Operation Green Quest raids led to the convictions of two people, including Abdurahman Alamoudi, who worked for the SAAR Foundation. Alamoudi admitted that he plotted with Libya to assassinate the Saudi ruler and was sentenced to 23 years in jail.

Further along we read at Norquist’s Wiki entry that he married a Palestinian Muslim in 2004 who was a director of the Islamic Free Market Institute.

Wiki provides investigators with 65 sources to follow up on if one has the time and the interest. But there is one source that came to my attention that is unsettling to say the least. Arnold Ahlert, a writer at Radicalislam.org, noted Norquist’s fading glory as defectors from his tax pledge continue to mount this way: “Americans might not like seeing their taxes go up, but Grover Norquist’s fall from grace has its benefits: As he goes down, so goes his pro-Islamist agenda.”

Radicalislam.org is funded by the Clarion Fund, and

is the leading source for information about the threat posed by Radical Islam to all those who value freedom, democracy and other Western values. This website features the latest news updates and developments as well as news analysis from experts on the topic of Islam. RadicalIslam.org also publishes a bimonthly email newsletter to over 100,000 subscribers which provides the latest developments, video clips and in-house analysis articles.

Wiki describes the Clarion Fund as “pro-Israel” and that it was founded by a Canadian Israeli film producer.

So what are we to make of all of this? For me, Norquist is a conundrum. He calls himself a “boring white bread Methodist” but is married to a radical Islamist with links to known terrorists opposing Israel’s existence. He has two degrees from Harvard and was an editor at the predictably liberal Harvard Crimson but also co-founded the “libertarian-leaning Harvard Chronicle” about which I can find nothing.

As his influence appears to be fading, maybe all this doesn’t matter. At the very least I’m going to be stepping lightly around this guy in any future articles or blogs.

Americans for Tax Reform CPAC Establishment Free Market Grover Norquist Islam Liberal Libya Taxes Taxpayer Protection Pledge Terrorism Video
This entry was posted on Tuesday, December 4th, 2012 at 7:29 am and is filed under Economics, Foreign Policy, Politics. You can follow any responses to this entry through the RSS 2.0 feed. Both comments and pings are currently closed.
Many of the articles on Light from the Right first appeared on either The New American or the McAlvany Intelligence Advisor.