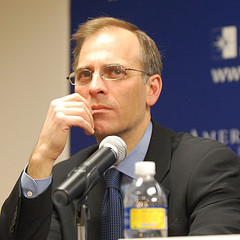 Mark Zandi is an establishment economist who is highly regarded and often quoted with reverence by others in the media. I’ve been known to quote him from time to time when he has something worthwhile to say. He’s a co-founder of Moody’s Economy.com, which is part of Moody’s Analytics, which in turn is owned by the credit rating company, Moody’s Corporation.

But his latest book reveals a fatal flaw. He made an error so glaring that it not only exposed his statist worldview but damaged his credibility significantly because of it.

Garett Jones reviewed his Paying the Price, over which people like Alice Rivlin of the Brookings Institution positively gushed. Wrote Rivlin:

One of our most insightful economists examines the extraordinary actions the Federal Reserve, the Treasury, and other authorities took to cope with the economic catastrophe that followed the financial crash of 2008. A readable, balanced account of what they did, why they did it, and how well it worked out–so far.

There are plenty of areas where Zandi tells only part of the story; it’s his book and he’s welcome to his angle. But his dismissal of Fannie’s and Freddie’s role in the housing bubble cries out for exposure.

Zandi uses incomplete data and then draws the wrong conclusion from it:

His discussion of the government-sponsored enterprises features a graph showing that the “nongovernment” share of subprime “mortgage originations” rose during the bubble years. From this he concludes that the private sector, not Fannie and Freddie, deserves the blame for the subprime bubble.

It’s that nasty, private capitalist, laissez-faire greedy runaway system that caused the Great Recession. This is the statist’s primary meme in placing the blame for the Great Recession. When something goes wrong it’s either George Bush’s fault or the failure of the private sector.

But by law, Fannie and Freddie are banned from originating mortgages. Instead, they buy mortgages originated by private lenders. How can a professional economist covering the economic scene not know this?

It’s worse than that. Jones has discovered that Zandi does know, which exposes him as a pawn of the establishment and of applying selective and incomplete data to “prove” his conclusion:

It’s not just that Zandi is speaking informally in a popular book. In a report he co-wrote last year, “The Future of the Mortgage Finance System,” one chart dutifully reports Fannie and Freddie’s “% of total mortgage originations”…

The fact that the mortgage giants originated zero mortgages leads to evidence Zandi ignores. The two firms bought boatloads of low-quality mortgages from the private sector. A spate of federal lawsuits against a few major lenders indicate that private lenders did their best to dump weak mortgages onto Fannie and Freddie. But often enough, the two firms were willing buyers of non-traditional mortgages, trying to meet ever-more demanding affordable-housing goals put on them by the Department of Housing and Urban Development.

This deliberate lack of clarity by Zandi seriously damages his credibility:

Zandi’s assertion that Fannie and Freddie were “minor players in the crazed lending of the 2000s” is wrong, and the method he adopts as proof seriously mars Paying the Price.

It’s not much a stretch here to accuse Zandi of falsifying his data to prove his fore-gone conclusion: it’s the private sector that’s to blame for the Great Recession, not government policy implemented through government agencies Fannie and Freddie.

Zandi is an establishment economist. This flaw in his book proves it.

Economy Establishment Fannie Mae Federal Reserve Freddie Mac Great Recession Private Sector Recession
This entry was posted on Monday, December 3rd, 2012 at 5:52 am and is filed under Economics, Politics. You can follow any responses to this entry through the RSS 2.0 feed. Both comments and pings are currently closed.
Many of the articles on Light from the Right first appeared on either The New American or the McAlvany Intelligence Advisor.