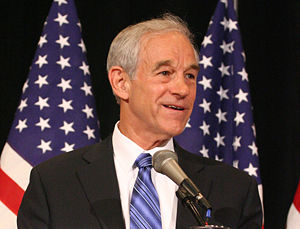 Ron Paul has the remarkable knack of pointing out the obvious in a world of planned chaos and confusion. It’s as if he wears night vision goggles.

The fiscal cliff is planned chaos. Congress did it deliberately:

While cutting taxes is always a good idea, setting up a ticking time bomb with a sunset provision, as the Bush tax cuts did, is terrible policy. Congress should have just cut taxes.

That tired old metaphor: kicking the can. The trouble with that strategy is that eventually the can stops rolling and Congress has to kick it again, and again, and again. Paul thinks they’ll kick it once again:

As the year draws to an end, America faces yet another Congressionally-manufactured crisis which will likely end in yet another 11th hour compromise..

The hysteria surrounding the January 1 deadline for the Budget Control Act’s spending cuts and expiration of the Bush tax cuts seems all too familiar. Even the language is predictably hysterical: if government reduces planned spending increases by even a tiny amount, the economy will go over a “fiscal cliff.”  This is nonsense.

What is the best course for Congress to take? Cutting spending, of course:

This rhetoric is based on the belief that government spending sustains the economy, when in fact the opposite is true.  Every dollar the government spends is a dollar taken from consumers, businessmen, or investors. Reducing spending can only help the economy by putting money back in the hands of ordinary Americans.

There’s clarity that won’t be found on CNN or MSNBC, and rarely on Fox News. All the conversation is about raising taxes, increasing government revenues, doing “what’s fair,” etc. Precious little is about what to cut, where to cut, and by how much.

The reality is, however, that neither Republicans nor Democrats are serious about cutting spending. Even though U.S. military spending is exponentially larger than any other country and is notorious for its inefficiency and cost overruns, Republicans cannot seem to stomach even one penny of cuts to the Pentagon’s budget.

And it’s not just the Republicans:

Democrats are digging in their heels on not cutting any welfare or entitlement spending and instead propose to fix the deficit by raising taxes on the rich, even though the U.S. Government already has a progressive tax code and the rich already pay more than their fair share. Furthermore, these higher taxes would fall on small business owners, investors, and entrepreneurs—in other words, the source of economic growth and new jobs!

The real fiscal cliff will take place later, when it becomes clear to everyone, even the politicians, bond investors, and voters, that the government can no longer pay its bills:

We are indeed headed to a fiscal cliff and have been long before this latest hysteria cropped up. But it is not cuts to spending or reduced government “revenue” that will send us over the cliff, it is continued government spending that will.

For the moment, expect a compromise that will allow the government to keep on spending:

Look for a “bipartisan” compromise in late December, with Republicans giving in to tax increases and settling for phony spending cuts that actually grow government, and Democrats caving on defense cuts in exchange for tax increases.

Bush Tax Cuts Deficit Democrat Economy Fiscal Cliff Jobs Liberty Military Republican Ron Paul Small Business Spending Taxes Taxmageddon
This entry was posted on Monday, December 3rd, 2012 at 3:00 pm and is filed under Constitution, Economics, Politics. You can follow any responses to this entry through the RSS 2.0 feed. Both comments and pings are currently closed.
Many of the articles on Light from the Right first appeared on either The New American or the McAlvany Intelligence Advisor.