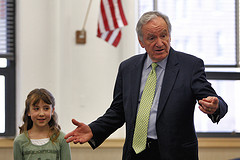 More than a year ago Senator Tom Harkin (D-Iowa) introduced legislation to impose a tax on high-speed trading and it has languished in the Senate ever since. On Thursday he had a chance to breathe some life into the measure in an interview at MarketWatch.com during which he offered the same platitudes from a year ago.

High-frequency trading, he said, generates no benefit to the economy and therefore could be taxed with little negative impact. Such a tax could raise an estimated $350 billion over the next ten years, he added:

I really don’t see any evidence that these high-speed traders add anything to the economy, but they do also create some aberrations in the market that have led to some disturbances.

On the one hand, my transaction tax doesn’t put them out of business but certainly they would have to pay 3 cents on every $100 in transactions they do. That’s really not very burdensome.

But also we need revenue. We have to get out of this deficit hole we’re in and this transaction tax is estimated to raise about $352 billion over ten years. That’s pretty substantial. And I don’t think it will do anything at all to hurt trading, what I call “real trading.”

This is a rehash of statements he made on his website back in November, 2009 when he, along with Representative Peter DeFazio (D-Ore.), introduced his bill. He explained then that it would be so small as to be essentially unnoticed in the grand scheme of things, that Wall Street could certainly afford it, and it might slow down that silly and useless high-speed trading that he equates with “unnecessary speculation.”

The bill would impose a tax of 3 cents on every $100 transaction on “all derivative contracts, options, puts, calls, forward contracts, swaps and other complex instruments.” But it’s unlikely to have any impact on the economy:

By setting the tax rate very low, the measure is not likely to impact the decision to engage in productive economic activity. It would, however, reduce certain speculative activities like high-speed computer arbitrage trading. A transaction tax could help to shift Wall Street away from short-term trading.  Given the very high volume of financial trading, it will raise considerable funds, badly needed for government services and for reducing deficits.

In other words, Harkin justifies his position by saying that, first, hardly anyone will notice, and second, the government really needs the money.

Harkin’s bill is the Tobin Tax in disguise. Back in 1972 economist James Tobin proposed a transaction tax on currencies following the breakdown of the Bretton Woods agreement in 1971. In a moment of candor, Tobin expressed the real reason for his tax: “My proposal is to throw some sand in the wheels of our excessively efficient international money markets” and to provide funding which “could appropriately be paid into the IMF [International Monetary Fund] or [the] World Bank.”

Tobin was heavily influenced by John Maynard Keynes, himself a speculator and knowledgeable about the very markets Harkin wants to tax. Keynes was also an interventionist into financial markets, remarking in 1936 that:

Speculators may do no harm as bubbles on a steady stream of enterprise. But the situation is serious when enterprise becomes the bubble on a whirlpool of speculation.

The introduction of a substantial government transfer tax on all transactions might prove the most serviceable reform available, with a view to mitigating the predominance of speculation over enterprise in the United States.

Great minds think alike, it is said, and Harkin and Tobin and Keynes agree on one thing: speculation is dangerous but free enterprise is good. Speculation must be damped down with a tax slowing speculation but not harming the general economy.

That’s all theory, of course. How did it work in Sweden?

Sweden imposed a financial transaction tax on stocks in 1984 in the amount of 0.5%, which raised the cost of each complete transaction (buying and selling) by 1.0%. Its impact on the economy was expected to be minimal, and was projected to raise $225 million for the government in the first year.

In anticipation of the tax, the country’s stock market dropped nearly 8 percent. When the tax was then applied to bonds, trading in the bond market dropped by 85 percent, the futures market dropped by 98 percent and the options market disappeared altogether. By the end of the year, revenues totaled $7.5 million, and 60 percent of all Swedish equity trading moved offshore to avoid the tax. By 1991 the tax had been abolished.

Perhaps Senator Harkin should talk to economics professor Kenneth Rogoff  before he sits for another interview to promote his bill. Rogoff has looked at financial transaction taxes like Harkins and concludes that:

In the long run, wages would fall, and ordinary workers would end up bearing a significant share of the cost.

So much for a benign tax that would raise revenues without consequences.

Deficit Economy IMF Senate Stock Market Taxes Wall Street
This entry was posted on Friday, November 30th, 2012 at 7:00 pm and is filed under Economics, Politics. You can follow any responses to this entry through the RSS 2.0 feed. Both comments and pings are currently closed.
Many of the articles on Light from the Right first appeared on either The New American or the McAlvany Intelligence Advisor.