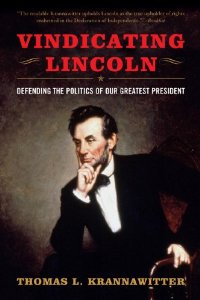 Those who have not read any critiques of Abraham Lincoln will be at a loss to understand why the 16th president would need to be vindicated in the first place. Upon investigating the matter further, however, the reader may come to the place of Benjamin Franklin, who wrote:

Having lived long, I have experienced many instances of being obliged, by better information, or fuller consideration, to change opinions even on important subjects, which I once thought right, but found to be otherwise.

And so the first thing Professor Krannawitter does is dip into the increasingly large well of those critiques first, to explore the charges at length, and then attempt to respond in Lincoln’s favor.

This, according to Krannawitter, isn’t just an intellectual exercise:

When critics attempt to knock Lincoln out of the pantheon of American heroes, they add to the growing cynicism of American politics. After all, if Americans come to believe that the president reputed to be the greatest was in truth a scoundrel unworthy of respect, then surely they will view all lesser politicians as such, adding to the mistaken idea that there is nothing noble or beautiful about politics…

His opening chapter serves to illustrate the enormous difficulty Krannawitter faces in setting things aright. He offers lengthy quotes from two debates Lincoln had with Judge Stephen Douglas in 1858. In the first debate on August 21st,Lincoln said

I have no purpose to introduce political and social equality between the white and the black races. There is a physical difference between the two, which, in my judgment, will probably forever forbid their living together upon the footing of perfect equality, and inasmuch as it becomes a necessity that there must be a difference, I, as well as Judge Douglas, am in favor of a race to which I belong having the superior position.

Two more debates followed, allowing Lincoln to consider not only his position, but the effect his words were having on his audience. Nevertheless, during the fourth debate, on September 18th,Lincoln expanded his remarks:

Several highly critical books on Lincoln were cited by Krannawitter, including The Real Lincoln: A New Look at Abraham Lincoln, His Agenda, and an Unnecessary War, and Lincoln Unmasked: What You’re Not Supposed to Know about Dishonest Abe, both authored by Thomas DiLorenzo. DiLorenzo makes no effort in explaining or defending Lincoln’s statements, but offers them instead as simple evidence that Lincoln’s true views about slavery are being deliberately hidden from any public discussion about Lincoln. Krannawitter, on the other hand, prefers to defend Lincoln’s views by suggesting that critics such as DiLorenzo, “offer almost no analysis of Lincoln’s words and fail to identify precisely where they believe Lincoln advocates white supremacy. In fact, the more closely one inspects Lincoln’s words…the more the evidence condemning Lincoln as a racist seems to evaporate.”

He offers, as evidence against such a view of Lincoln, the following words from Lincoln’s first debate which were left out of DiLorenzo’s initial quote. Adds Lincoln:

But I hold that, notwithstanding all this, there is no reason in the world why the negro is not entitled to all the natural rights enumerated in the Declaration of Independence, the right to life, liberty, and the pursuit of happiness. I hold that he is as much entitled to these as the white man…in the right to eat the bread…which his own hand earns, he is my equal and the equal of Judge Douglas, and the equal of every living man. (emphasis in original)

And so this review must end, leaving the reader in the position of deciding whether to leave the field for more interesting conversations, or to dive more deeply into the matter and determine, to his own eventual satisfaction, Lincoln’s position on the races in America. Once having decided to dig more deeply, the reader will discover other issues, such as whether charges that Lincoln’s goal in the Civil War was to preserve the union or to end slavery, whether he was the “father of big government,” and whether states posses a constitutional right of secession. Many of these issues remain highly relevant today as more readers dig more deeply into the motivations of those who have so significantly impacted our history and our lives today.

Constitutional Declaration of Independence Liberty Natural Rights War
This entry was posted on Friday, November 30th, 2012 at 10:53 am and is filed under Constitution, History, Reviews. You can follow any responses to this entry through the RSS 2.0 feed. Both comments and pings are currently closed.
Many of the articles on Light from the Right first appeared on either The New American or the McAlvany Intelligence Advisor.