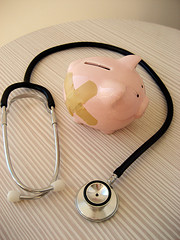 I went to see my doctor (a nurse practitioner, actually) yesterday for my annual physical. Everything’s fine, thanks for asking. But we got (somehow, I don’t know how) onto the subject of Obamacare and Medicare and “concierge” medical practices and the like. Out of that conversation I learned that she thinks (based on her daily experience) that Medicare is just fine. She’s not concerned. She likes where she works (someone else is paying all the enormous overhead to keep her state-of-the-art practice going) and has no interest, or incentive, in starting her own “concierge” practice to avoid the inevitable bankruptcy of Medicare.

With a long-term unfunded liability of $38 trillion, Medicare will go broke if it isn’t fixed, and compelling providers to accept lower fees is how ObamaCare proposes to fix it.

At the moment my doctor isn’t feeling the pinch. But it’s coming. Fortunately, she’s not a neurologist:

Neurologists are about to feel the sting of the Affordable Care Act. Beginning Jan. 1, Medicare will be paying them less for electrodiagnostic procedures used in identifying and treating a wide range of nerve and muscle disorders. Reimbursement rates for some tests will be slashed by more than 50 percent, and the Centers for Medicare & Medicaid Services estimates that payments to neurologists overall will shrink by 7 percent next year. (my emphasis)

Any excuse will do. Remember that the government can do what it wants. It doesn’t even have to have a reason. The reality is that by increasing demand and reducing supply the result will be shortages. Those shortages will result in the inevitable reduction in services. Hence, those “death panels” deciding who gets served and who doesn’t.

In 2009 President Obama suggested that maybe his sick grandmother’s hip replacement wasn’t something “society” should have had to pay for. Americans, he said, needed “some independent group” to make those “very difficult” decisions.

And just who would be that “independent group?”

He explains the reality, and why I asked my doctor if she was considering a “market-based” practice outside the reaches of Obamacare:

Medicare is dysfunctional not because it lacks wise overseers, but because it is severed from normal market forces. Patients don’t spend their own money. Providers are paid by the government. Doctors and hospitals have little incentive to compete on price, or to ensure that patients get the most value for their money.

I think my doctor is terrific. But I’m going to continue my search for a healthcare provider who has opted out of the impending disaster of Obamacare and Medicare and wants to practice medicine the old-fashioned way: fee for service, with no middlemen to get in the way.  I don’t want some “independent” group of government bureaucrats deciding whether I “qualify” or not.

Bankruptcy Healthcare Medicaid Medicare Obama Obamacare
This entry was posted on Thursday, November 29th, 2012 at 3:00 pm and is filed under Uncategorized. You can follow any responses to this entry through the RSS 2.0 feed. Both comments and pings are currently closed.
Many of the articles on Light from the Right first appeared on either The New American or the McAlvany Intelligence Advisor.