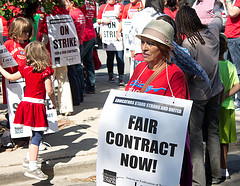 Just in case you missed it, the teachers at Old Rochester Regional Junior High School have revealed their immaturity and pettiness, and, I might add, their agenda: they went on strike against their own students.

It seems that the teachers’ union has balked at signing a collective bargaining agreement with the school board for the past two years and the teachers are feeling put upon to continue to work (and get paid) without a contract. To protest this “outrage” they decided to leave the building when the kids wanted to serve Thanksgiving Day meals to local senior citizens. Kyle Olson found the details at WickedLocal.com:

As WickedLocal.com reported: “Despite not having their teachers to back them up, the eighth-graders at Old Rochester Regional Junior High School offered up their 23rd annual community Thanksgiving dinner Sunday, Nov. 18, in the school cafeteria for senior citizens in the Tri-towns.

“ORR Junior High Principal Kevin Brogioli debated whether he and the eighth-graders would be able to put on the community feast without the help of ORR teachers, who decided not to assist this year as a protest for being forced to work without a contract for two years.

“The snub caused some outrage and criticism from the community, who felt the students and the senior citizens were being unfairly penalized for the school district’s failure to offer the teachers union a workable contract.”

From my perspective, this illustrates how these teachers view their students: not as opportunities to serve but as tools to further their own agenda. And it is predictably leaving a bad taste in the mouths of the very people who are paying the teachers!

But the kids couldn’t have cared less. They went on without their help:

“We had more than 75 kids help, including some from the high school, and we had quite a few volunteers from the community step in so everything worked out great,” Brogioli was quoted as saying. “The kids were fantastic and quite a few of their parents helped, as well.”

He said when word got out that the event was understaffed [that’s his politically correct word for meaning that the teachers went on strike], “the outpouring from the community was tremendous.”

Gee, and all this time I thought it was the job of teachers to teach the kids. How silly of me.

Collective Bargaining Politically Correct Unions
This entry was posted on Tuesday, November 27th, 2012 at 3:00 pm and is filed under Economics, Politics. You can follow any responses to this entry through the RSS 2.0 feed. Both comments and pings are currently closed.
Many of the articles on Light from the Right first appeared on either The New American or the McAlvany Intelligence Advisor.