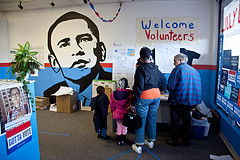 I’m generally an optimistic person. I’m always looking to see what’s happening that’s good and positive. I continue to see (or try to) the glass as half full.

I have lots of company. John Hawkins thinks there are a lot of things going right, if we just take the time to look. He says:

Although studies show that we conservatives are usually happier and more optimistic than most about our personal lives, we also tend to be a bit more pessimistic than the average person about the country. We look at our unsustainable level of spending, the dramatically expanding, increasingly lawless welfare state, encouragement of tribalism and class hatred as a political tactic, hostility towards Christianity, schools that teach socialism and liberalism, the morally bankrupt entertainment industry and the reelection of a man who may have had the single worst performance as President of anyone in our nation’s history and we quite naturally fear for the future of our country.

This is appropriate and anyone who tells you that our nation isn’t in serious jeopardy right now is either ignorant or lying to you. Yet and still, there are plenty of reasons to be optimistic about this country’s future.

Of the seven he chooses to talk about, I think the first is the most important:

1) The reelection of Barack Obama has the potential to be a turning point. Despite Barack Obama being a mean-spirited, habitually dishonest socialist who was presiding over a terrible economy and a record of incompetence unprecedented in America’s history, he was reelected anyway. This should be a wake-up call…

The grassroots have now been alerted that just showing up at a Tea Party isn’t good enough either. Social conservatives and the Christian church should be shocked out of their complacency as well. Although Obama seems likely to make a mess of things in his second term, that will give the American people more insight into the wages of liberalism…

God willing, as terrible as Barack Obama’s election seems to be for the country today, it will turn out to be a positive turning point.

I couldn’t agree more. Although he still thinks the Republican Party can be redeemed, I don’t. But Obama has galvanized (and will continue to do so) the hard-core freedom fighters who will inevitably make all the difference. The more he pushes his agenda, especially as he moves to establish martial law (along with midnight arrests without warrants), the more backbone the side-line observers will grow.

I especially enjoyed the part of the movie Red Dawn when one of the initial Wolverines was seen giving instructions to an increasing number of citizens now enlisting in the fight. Reviewers that I read missed that point entirely.

So keep pushing your agenda, Mr. Obama. You’re digging your own grave. And that’s a good thing.

Christian Economy Freedom Obama Republican Socialism Spending Tea Party
This entry was posted on Tuesday, November 27th, 2012 at 11:00 am and is filed under Constitution, Economics, Politics. You can follow any responses to this entry through the RSS 2.0 feed. Both comments and pings are currently closed.
Many of the articles on Light from the Right first appeared on either The New American or the McAlvany Intelligence Advisor.