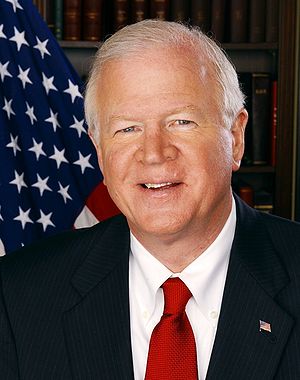 A defection on Thursday from Grover Norquist’s “Taxpayer Protection Pledge” by Saxby Chambliss, the senior Republican Senator from Georgia, triggered similar defections over the weekend. It also triggered a strong response from Norquist.

Said Chambliss: “I care more about my country than I do about a 20-year-old-pledge. If we do it his way then we’ll continue in debt, and I just have a disagreement with him about that.”

The pledge that Chambliss is breaking states:

One, [I will] oppose any and all efforts to increase the marginal income tax rates for individuals and/or businesses; and

Two, [I will] oppose any net reduction or elimination of deductions and credits, unless matched dollar for dollar by further reducing tax rates.

This reflects the philosophy of Norquist and the organization he founded in 1985, Americans for Tax Reform, that “opposes all tax increases as a matter of principle.” Norquist explained why the pledge was necessary, and why it grew in such importance that in the 112th Congress, all but six of the 242 Republicans in the House and all but seven Republicans in the Senate signed it, in an article in Human Events  in June 2010:

Raising taxes is what politicians do when they don’t have the strength to actually govern.

The taxpayer protection pledge was created in 1986 by Americans for Tax Reform as part of the effort to protect the lower marginal tax rates of Reagan’s Tax Reform Act of 1986.

It has grown in importance as one of the few black-and-white, yes or no, answers that politicians are forced to give to voters before they ask for their vote.

When Senator Chambliss bailed on his pledge, Norquist took him to task:

In February 2011 he wrote an open letter addressed to me … saying he would not vote for any plan that raised taxes. He would support only tax revenue that resulted from higher growth…

Raising taxes on the people of Georgia to pay for Obama’s reckless spending is not the right thing to do for America or Georgia. We have a problem because Washington spends too much, not because Sen. Chambliss has failed so far to raise taxes on the hard-working men and women of Georgia.

Norquist’s response to Chambliss’ defection didn’t faze Senators Lindsey Graham and John McCain, or Representative Peter King, all of whom bailed on their promises on Sunday, to be followed on Monday with the defection of Senator Bob Corker.

When you’re $16 trillion in debt, the only pledge we should be making to each other is to avoid becoming Greece, and Republicans…should put revenue [increases] on the table.

A pledge you signed 20 years ago, 18 years ago, is for that Congress.

For instance, if I were in Congress in 1941, I would have signed the declaration of war against Japan. I’m not going to attack Japan today.

The world has changed. The economic situation is different… I think everything should be on the table…

Senator John McCain said he really doesn’t want to raise taxes but would rather close loopholes, which of course is the same thing.

On Monday Bob Corker, junior Senator from Tennessee, also bailed, saying “I’m not obligated on the pledge. I…was just reelected [and] the only thing I’m honoring is the oath I take when I serve, when I’m sworn in this January.”

Unfortunately, each of these defectors has taken the same oath, and each has failed to uphold it. Here is what each of them solemnly promised to do:

I do solemnly swear that I will support and defend the Constitution of the United States against all enemies, foreign and domestic; that I will bear true faith and allegiance to the same; that I take this obligation freely, without any mental reservation or purpose of evasion; and that I will well and faithfully discharge the duties of the office on which I am about to enter: So help me God.

According to the Freedom Index (FI), made available by The John Birch Society, each defector has consistently voted against the Constitution. The latest index on Chambliss reveals a rating of 69, which means that 3 times out of 10 he voted for a bill that violated the Constitution he swore to uphold and defend. The FI index on Graham is hardly better, at 73, while McCain’s score of 78 is only a slight improvement. Rep. King’s index comes in at an abysmal 62, while Corker’s is just 69.

Some are asking how could elected officials sign the Taxpayer Protection Pledge and then renege on it? A better question is, why wouldn’t they? After all, each has reneged on his solemn oath to uphold and defend the Constitution. What’s a little thing like Norquist’s pledge in the grand scheme of things?

Americans for Tax Reform Freedom Greece Grover Norquist Income Tax John Birch Society John McCain Obama Republican Senate Spending Taxes Taxpayer Protection Pledge War
This entry was posted on Monday, November 26th, 2012 at 7:00 pm and is filed under Constitution, Economics, Politics. You can follow any responses to this entry through the RSS 2.0 feed. Both comments and pings are currently closed.
Many of the articles on Light from the Right first appeared on either The New American or the McAlvany Intelligence Advisor.