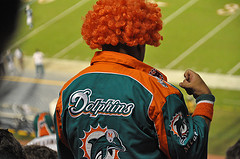 In an interesting study, 247Wallst.com counts 13 professional sports teams that are losing games, fans and money, and that many appear to be in a death spiral: they don’t have the money to hire the best players, so the players they are able to hire don’t play as well, so they lose games, and the fans lose interest, and so the owners have less money to hire the best players, and down and down they go.

Since this is football season, let’s look at the Miami Dolphins. During the 2001-2002 season, the team won 11 games and lost 5, putting them in first place in the AFC East.  The beat the Colts in the first playoff game but were shut out by the Raiders in the next round.

The fans loved it, with an average of 73,470 of them attending during that season.

Fast forward to last year: the Dolphins won just 6 games, and haven’t won a league championship in a decade. Fan attendance? Down by 17%, to just 60,866. During that decade their record is a dismal 60-84 and they’ve suffered three losing seasons in a row. This year, so far, their record is 4-6.

But the Dolphins are 13th on the list of losers. Number 1 is the Seattle Mariners. In 2002 their record was 93-69, enough to push them to 3rd place in the AL West. Last year? Not so good: the team finished dead last in its division: 75-87. And no league championships in 10 years. The predictable results? Fan attendance down by half and stadium capacity for home games was the lowest in major league baseball:  44%. And season ticket sales have declined by 61%.

There is much more to the back story than 247Wallst.com is telling, or is able to tell. They just do the analysis by the numbers and then publish it.

Here are some questions. How many of the stadiums are subsidized by taxpayers who have little or no interest in football or baseball? How many of these teams would even exist without such subsidies? Is the market as a result giving the owners and investors behind the teams false signals on which they base their decisions on fan attendance, prices to pay for players, prices to charge for tickets, and so forth?

I’m sure of it. Once government gets involved in any market, the distortions become evident, sometimes almost immediately.

Which brings us to today’s stock market. The recent market sell-off followed by its even more recent recovery are leading many analysts to conclude that 1) the European crisis has been solved, 2) deficits don’t matter, and 3) the fiscal cliff can will somehow be successfully resolved.

Here’s the rule:  Uninformed or ill-informed investors and their money will soon be parted, thanks to government intervention.

Fiscal Cliff Stock Market Subsidies Taxmageddon
This entry was posted on Monday, November 26th, 2012 at 11:00 am and is filed under Constitution, Economics, Politics. You can follow any responses to this entry through the RSS 2.0 feed. Both comments and pings are currently closed.
Many of the articles on Light from the Right first appeared on either The New American or the McAlvany Intelligence Advisor.