How Minimum Wage Laws Put Productive People Out of Work 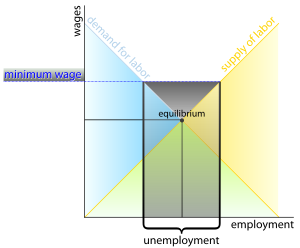 Economist Donald Boudreaux uses himself as an example. He reads in the Washington Post one day that the government, in its infinite wisdom, has decided that all economists must be paid $500,000 a year, not a penny less.  Boudreaux admits that he doesn’t make that much – half a million a year is a sum “which is multiple times my current annual earnings” – and then asks his students: “would I be excited about this news?”

Most people’s’ reaction, I’m sure, would be “good for you!” You’re finally getting paid what you’re worth. It’s a great gettin’ up mornin’!

Boudreaux doesn’t think so. He considers himself “an ordinary and none-too-accomplished professor of economics at George Mason University” and knows that if he were really worth that much, the free market, or what’s left of it, would reward him accordingly. But because he isn’t – he may be right, although I like his writings a lot – he’d be put out of work immediately:

The world doesn’t work that way, despite legislators and many of their constituents believing the contrary.  Because my labor is not worth, to any employer, $500,000 annually – and because no alteration in my work patterns or duties can make me worth such a sum – no employer will pay me $500,000 annually to work as an economist.  That democratically elected government officials enact legislation as if this reality were optional does nothing to change this reality.

And that’s the whole point, isn’t it? That government bureaucrats don’t live in the real world, but only in the world they have conjured in their minds as to how it should work. I call it bureaucratic hubris. And the result is good people doing a good job at rates the market is willing to pay are now out of work.

Spare us from such remedies!

Donald Boudreaux Minimum Wage
This entry was posted on Monday, November 26th, 2012 at 7:23 am and is filed under Economics, Politics. You can follow any responses to this entry through the RSS 2.0 feed. Both comments and pings are currently closed.
Many of the articles on Light from the Right first appeared on either The New American or the McAlvany Intelligence Advisor.