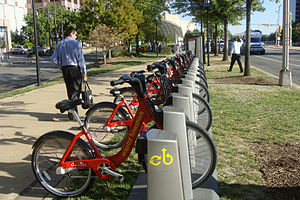 City planners in Atlanta, Georgia, are getting excited about starting a bike-sharing plan, pointing to a study that suggests it might just work there. The article from The Atlanta Journal-Constitution was revealing:

Despite metro Atlanta’s car-centric reputation, bike advocates believe [that] reduced gas costs, connections from buses and trains to jobs centers and the opportunity to burn a few calories while seeing the city on two wheels would prove appealing if bike-sharing goes mainstream. (emphases added)

“Car-centric” may just be an understatement. Fodor’s Travel Intelligence outlines the hazards facing travelers to Atlanta which is laced with heavily travelled interstate highways populated with crazy drivers:

The city is encircled by Interstate 285. Three interstates also crisscross Atlanta: Interstate 85, running northeast-southwest from Virginia to Alabama; Interstate 75, [one of the ten most-congested interstate highways in the United States] running north-south from Michigan to Florida; and Interstate 20, running east-west from South Carolina to Texas.

Some refer to Atlanta as the “Los Angeles of the South,” because driving is virtually the only way to get around. Atlantans have grown accustomed to frequent delays at rush hour—the morning and late-afternoon commuting periods seem to get longer every year. The South as a whole may be laid-back, but Atlanta drivers are not; they tend to drive faster and more aggressively than drivers in other Southern cities. Rarely do Atlantans slow down at a yellow light.

Nevertheless, city planners “believe” that saving gas will offset the hazards, while giving those who survive “the opportunity to burn a few calories” and should “prove appealing” to them, but only “if bike sharing goes mainstream.”

Atlanta wants to keep up. Josh Mello, one of the bureaucrats excited about the plan, says: “Given where our peer cities are…we could easily fall behind…if we don’t move quickly.”

Details remain to be worked out, such as who the planners could inveigle into funding this scheme. But they’ve already begun: the service would start in downtown Atlanta and extend out from there, according to Mello. With just 45 miles of bike paths in a city with a metropolitan population of more than 5 million people, lots of funding will be required to make Atlanta bicycle-friendly.

And then there’s the weather. Hot and humid, the city for years has successfully promoted itself as “Hotlanta” which is partly reflected by average high temperatures in July averaging 89 degrees and exceeding 90 degrees or higher more than 40 days a year.

Perhaps Mello and his fellow planners in Atlanta could look at how well bike-sharing has worked out elsewhere, say in Washington, DC. According to a puff piece in Wired magazine,

Capital Bikeshare in Washington, D.C. is the model share program of the moment. Starting in 2010 with 1,100 bikes and 18,000 members, the program now has over 1,670 bikes and 175 pick-up and drop-off stations, making it the largest sharing consortium in the country…

Capital Bikeshare’s 2011 member survey showed that over 41 percent of users reported that they cut down on time in their cars since joining, adding up to driving 523 miles less per year, or 487.7 pounds of carbon dioxide emissions. Capital’s members kept 1,632 tons of carbon dioxide out of the air in the organization’s first year.

Most bike-share programs average a $75 annual fee, which, according to the same survey, translates to a driver saving about $819 a year instead of driving a car or traveling via taxi.

Missing from Wired’s article was the abysmal failure of Washington, DC’s previous bike-sharing program, Smartbike. With 120 bikes on ten racks inside bus shelters around the city, Smartbike peaked out at 1,696 subscribers, 220 of whom never activated their membership cards, and of those who did, 242 never rented a bike.

Also missing from the Wired article was just how much taxpayer money was, and will continue to be, needed to get the Capital Bikeshare program off the ground. Its administrator, Chris Holben, said last November that he hoped the revenues from the new program would hit 50% of operating costs, exclusive of any of the program’s startup costs. Those costs were funded, once again, by government grants including $6 million from the US Department of Transportation, along with the help of Arlington County’s taxpayers, and the State of Virginia’s Department of Rail and Public Transportation. Total cost so far: $13 million, and $1 million a year to run it.

One of the first communities to succumb to the siren song of fewer emissions and lower automobile traffic through bike sharing was Portland, Oregon, in 1994, with its Yellow Bike Project. The city used taxpayer funds to buy some bicycles and put them out on the street for people to use. The effort ended shortly thereafter when most of the bikes were either stolen or vandalized.

In 1996, the same approach was tried in Tucson, called the Orange Bike Project, also using government money to buy 30 bicycles, all painted orange, with the same result: they disappeared within weeks and the program was shut down.

Never learning from others’ experience, city planners in Madison, Wisconsin, initiated its own bike sharing program – the Red Bikes Project – again with the same result. As the bikes began to disappear, security deposits of $80 through a credit card were instituted, and now apparently the bikes are safe from vandals but are not being used except in limited parts of the city.

City planners in Toronto, Canada, with a little more name creativity, set up BikeShare, which purchased 150 bikes, again with taxpayer money, and requiring yearly memberships to reduce theft and vandalism. It never got off the ground either, with just 400 members out of a city of 2 ½ million signing up for the program. It was discontinued in 2006.

Not willing to give up on the “green” ideology, the taxpayer-funded University of California, Irvine (UCI), decided to give bike sharing a go. In the fall of 2009, UCI introduced the Zotwheels program on its campus, again with an annual membership fee and a $200 charge if the bike is stolen, lost or damaged. At its peak, revenues from users only met a small part of the system’s operating costs, with the remaining maintenance costs being paid for by taxpayers through UCS.

Taxpayer funds from the Federal Transit Administration flowed upstream to Boston to help pay for its bike sharing program, Hubway. In the first couple of months enough interest was generated to cause the planners to expand Hubway across the Charles River to Cambridge and Somerville.

There was one brief effort by four University of Maryland graduates to design a high-tech management system for these failing, government-funded programs to run a little more efficiently. They tried to raise some money for their project through a crowd funding website, Launcht, but failed to raise even the $15,000 they needed.

It’s clear then, or should be to the city planners with their big dreams of how to spend other peoples’ money, that their efforts are doomed to failure. The market simply isn’t there to make such bike sharing projects profitable. Brian Schwartz, writing for the Independence Institute’s blog made an excellent point:

Some might argue that private funding could not have built B-cycle [Denver’s bike sharing program funded by taxpayers]. But as economist Henry Hazlitt would say, B-Cycle “has in fact been built by private capital – the capital that was expropriated in taxes.”

We won’t see the goods, services, and non-profit ventures that never materialize because governments took [that] money by force from people who would have spent it differently.

Such understanding is likely to dissuade city planners in Atlanta from finding taxpayer money somewhere to fund their bike sharing scheme.

Henry Hazlitt Jobs Theft
This entry was posted on Saturday, November 24th, 2012 at 7:00 pm and is filed under Economics, History. You can follow any responses to this entry through the RSS 2.0 feed. Both comments and pings are currently closed.
Many of the articles on Light from the Right first appeared on either The New American or the McAlvany Intelligence Advisor.