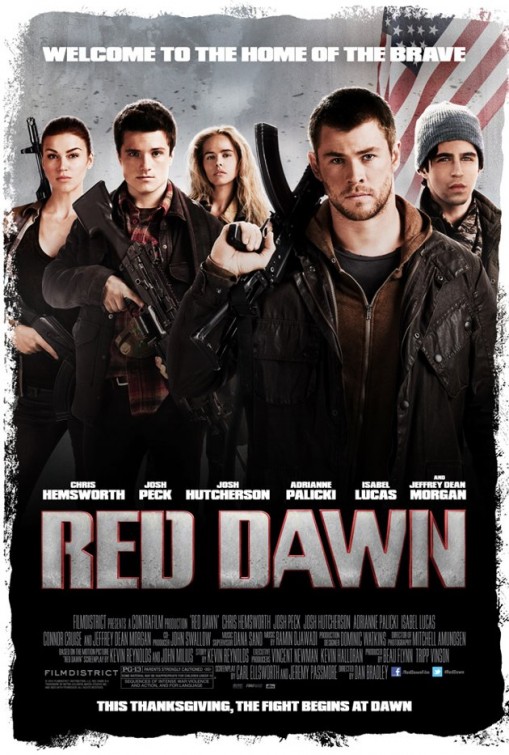 My editor at The New American asked me to go see Red Dawn (2012) and do a review of it for TNA’s online blog. That’s like getting paid to eat ice cream!

So I went to the theatre with my daughter yesterday before the Thanksgiving Day festivities began at our home, and I thought I’d share some initial thoughts about the movie. There’ll be a more serious review that will appear here later in the day, but for now, here are some of my initial impressions.

When the attack began, it didn’t make much sense. I’ve always enjoyed the James Bond movies because, at least in the early iterations the story line was believable. It teetered often on the far edge of credibility but there was always enough logic to it take make sense. When the attacks began the movie reached the edge of credibity…and then jumped off into space. It became almost silly: the North Koreans are attacking us!

What?  Who? How? Why? There were hundreds of bombers in the air dropping parachutists onto Seattle. They looked like World War II bombers. Where did they come from? North Korea? A country that can’t afford to feed it’s people or turn on the lights at night has mounted a full-scale attack on America’s west coast? Come on, now! Really? Let’s get real, as the kids say. Did these fly over from NK across the Pacific? Where are they going to land? Where was their staging point?

You get the idea. It took awhile for this incongruity to wear off.

But once I got past that, the movie took on some very real and resonant meaning. And it raised a number of questions. How prepared are we (as citizens) to resist and repel such an attack? Answer: not very. The brothers had a cabin in the mountains where they had stashed some provisions and weapons. How many people have done that, I wonder? Not many, I bet.

The story line was very close to the original Red Dawn, and there were lots of other questions raised. There were some pieces missing, too, but in all it was an enjoyable and thought-provoking experience. My daughter enjoyed it as well – she called it “intense” and said later that her stomach hurt from holding her breath for 90 minutes!

The New American War
This entry was posted on Friday, November 23rd, 2012 at 6:29 am and is filed under Reviews. You can follow any responses to this entry through the RSS 2.0 feed. Both comments and pings are currently closed.
Many of the articles on Light from the Right first appeared on either The New American or the McAlvany Intelligence Advisor.