Dependence on Government Continues to Grow 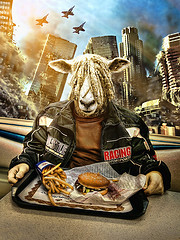 The Heritage Foundation just published its latest report on its “Index of Dependence on Government” and it doesn’t look good: Romney was right, there are more riders in the boat than pullers at the oars:

The Index of Dependence on Government, which measures dependence on government  programs for housing, food, income, student aid, or other assistance, has risen dramatically since 2007.

If you click on the link above you’ll see their graph. It’s exponential. Not only is it rising, it’s rising at an increasingly rapid rate. As Herb Stein says, if something can’t continue, it will stop.

Here is a restatement of the graph from Heritage:

This is why the welfare state is so destructive. It removes personal responsibility from individuals who then become more like sheep or cattle. Some call them “sheeple.” They are right. Heritage points this out:

Today, more people than ever before depend on the federal government for housing, food, income, student aid, or other assistance once considered to be the responsibility of individuals, families, neighborhoods, churches, and other civil society institutions. (my emphasis)

Since this is “unsustainable” (I’m beginning to hate that word) what will happen to these people when the government is finally forced to cut back or terminate these programs?  It’s not a pretty picture. When the “entitlements” (another disagreeable word) stop, what will those who think they are “entitled” do?

Gary North recognizes the problem but doesn’t have an answer:

What bothers me most is the dependence effect. It’s an addiction. It is spreading. People who trust the government will be betrayed. They are not prepared for this.

What about the rest of us who have seen what is coming and have tried to do something about it? I remember many years ago telling my study group about my preparations at the time: a year’s worth of food and water in my garage.

I asked them what their plans were?  One of them  said: “I have your address!”

Education Entitlements Federal Government Gary North Hate Heritage Foundation Income Tax Retirement Spending Taxes
This entry was posted on Friday, November 23rd, 2012 at 11:00 am and is filed under Constitution, Economics. You can follow any responses to this entry through the RSS 2.0 feed. Both comments and pings are currently closed.
Many of the articles on Light from the Right first appeared on either The New American or the McAlvany Intelligence Advisor.